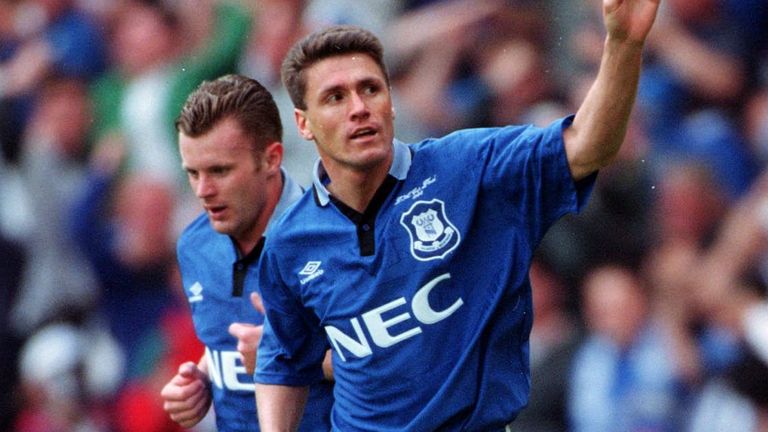 Everton’s FA Cup hero from 1995, Paul Rideout, recently spoke about the magical day when he scored against Manchester United at Wembley, beating the drop by winning against Ipswich and the management of Joe Royle former Oldham and Everton manager.

On the 1995 FA cup final, Manchester United and “that” goal

Paul Rideout said “You can still visualise those kind of moments in your mind’s eye. One of my main assets was the timing of my headers. Whatever people say, that was a top header. I had to generate the power and I had only one side of the goal to put it in while reacting quickly under pressure from Denis Irwin. At the end of the day you time it right. It needed to go in one spot and it did. If you look at it I think Peter Schmeichel got caught out because I don’t think he expected it to go back into that corner. It was kind of a slow motion goal. It didn’t fly into the back of the net, it looped in somewhat strangely. Manchester United were so dominant around that time but that season they ended up with nothing and us, who had been fighting to stay up, ended up beating them in the FA Cup final and being more successful than them.”

Beating Ipswich to Avoid the Drop

Paul Rideout said: “That game was more intense than the FA Cup final because we only had one more game after that and we didn’t want to have to go through another game like we’d had against Wimbledon the year before. Although we’d come through it, having to play in those type of matches are the worst feeling in the world and the thought of having to do it again was awful. My goal at Portman Road was in many ways just as important as the one at Wembley because of what it meant for our Premier League status. We’d been fighting against relegation all season and up until one week before the final, that had always been our main goal. In all honesty, none of our minds had been on the final and Joe Royle had said to us that it was just a bonus. It had been something of a relief just to stay in the Premier League and we were looking forward to the FA Cup final in a different way. If we’d have been comfortable in mid-table then we might have had more time to think about the game and over-thought it.”

Paul Rideout said “Joe’s man-management was fabulous. He’d been a forward himself and understood what it was like. I also put a lot of praise on Willie Donachie as well though, the way he came in and reorganised that group. We had what we had and everyone knew their job. That was the difference between Joe and Willie and the previous manager who had no concept of how to put things right. The instructions were to play to a certain shape and if you couldn’t do that then you weren’t going to play. Joe was a no-nonsense boss. If you annoyed him then you’d know all about it because he could be nasty – but in the right way – yet he could also be a really cool guy. He was one of my favourite managers of my career because he was a straight talker. We had grafters who would work their backsides off but they were intelligent footballers too who could play.”

#PremierLeagueStories – Former Bournemouth #AFCB manager #HarryRedknapp says relegating teams based on points per game will be unfair
#PremierLeagueStories – Aston Villa #AVFC Legend #LeeHendrie opens up on suicide attempts & his drinking problem
We use cookies on our website to give you the most relevant experience by remembering your preferences and repeat visits. By clicking “Accept”, you consent to the use of ALL the cookies.
Do not sell my personal information.
Cookie settingsACCEPT
Privacy & Cookies Policy