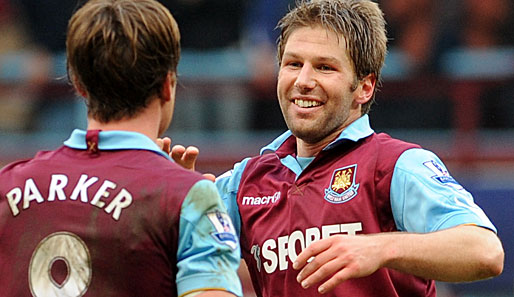 Thomas Hitzlsperger has opened up on the moment at Everton in which he knew his playing career was over and shared his experience of coming out as “Gay”. He admitted that he didn’t know where his future in football lay even before joining the Blues, but explained how a switch to Merseyside came about.

Thomas Hitzlsperger said “I would say at the end of my time at West Ham things had changed in my life and become more difficult. I knew also as a footballer I wasn’t at my best, my peak had passed and I needed to look for new opportunities. I went back to Germany, again I was injured a lot, and then I was almost done with football. I lost interest, had a lot of injuries and thought, ‘What’s the point? You’re moving from one place to another within six or 12 months and you don’t get the same success and joy anymore’. So I took some time off and went to the States for I think three months, had a good time and enjoyed myself. But then my agent phoned me and asked if I wanted to play again, I said I’m not sure, I think I’m done with football. I trained with the [San Jose] Earthquakes for a couple of weeks and thought I’d give it one last shot, but if I do play I want to play in England. He asked, ‘Where do you want to go?’. There were very few clubs I’d like to play for and one was Everton, so I said, ‘If you can get me to Everton I’d love it’ and that’s where I ended up. When I joined it was a trial at first, David Moyes wanted me to come in and see what I’d got and I think I did train well at the time. But, I knew it was difficult because the team played so well that season. You kind of see yourself and think you’re still good enough, but this team is performing and it will be difficult. I tried hard, but in the end I think the manager made the right choice in the teams he picked at the time. Similar to all the other clubs I’ve been to in England there were great people there and some of the teammates, staff – you always find friendly people there which makes things easier. I got to a stage where I realised I wasn’t the same anymore and needed to change something about what I was doing. That’s why, at the end of the Everton spell, I knew my time was up in football. I had a couple of training sessions that still stick with me. We were doing shuttle runs and usually I was quite good at it, the lads were off but I did train that week because I wanted to be fitter than everyone else. We had those runs and I was absolutely hopeless. David Moyes was shouting at me saying, ‘Come on Thomas, I want more from you’. Then I realised my head wasn’t in it anymore. That’s when I thought it was clear and obvious I stopped here, just making sure I finished the season well and put my best efforts in every day in training.”

Six months after leaving Everton Hitzlsperger came out as gay, and remains the most high-profile men’s professional player to do so. However, the 38-year-old revealed he nearly opened up about his sexuality prior to his switch to Goodison. Hitzlsperger also shared his advice for any professional player who wants to come out, and explained there is no set of rules to be able to do so. But, he knows he can share his positive experiences with anyone to encourage them to feel more comfortable in themselves.

Thomas Hitzlsperger said “Before I joined Everton I was at Wolfsburg and that was the period I thought I had to go public. I was talking to friends, talking to the media privately, I was talking to a lawyer. I was saying I think it’s time to speak up and move forward. Almost everybody told me not to do so because they feared for my career and various other things. People are very fearful when it comes to that. I think I wasn’t ready, it probably was the right decision. So I kept it to myself, lived my life the way I wanted to live, and at Everton I focused on my football. But when I left Everton I thought, ‘If I don’t speak up properly, nobody will’. That’s why, six months later, I did come out publicly. People always focus on the bad side of it, they think it’s all going to be bad and there will be criticism. My life has been great as a football player, it improved afterwards because there’s been such a positive response. You’d be amazed at how life can change and that’s my experience. I try to concentrate on that, it was so much better than a lot of people anticipated and that’s why it was the right thing to do. There is just not one way of doing things. You’ve got to talk people. As I said in my case I probably wasn’t confident enough, I was listening more to the voices around me than my inner voice, and it was probably right to do so. That’s why I think players who have that on their mind have got to be confident and have a good support system. That’s why there’s not one single plan or way to do it, you’ve got to talk to people and see the position they’re in. What I can do is encourage people to be brave and open about who they are, talking about the positive experiences that I’ve had since. Even though some doors will close, new doors will open. Your life will be richer and probably better than before because you’ve got nothing to hide.”

Thomas Hitzlsperger spent one season at Goodison Park in 2012/13 which proved to be his last in professional football before his retirement. The former Germany international is now the CEO of Bundesliga side VfB Stuttgart and has been looking back over his footballing career.

#PremierLeagueStories – #JordanPickford is criticised more than Prime Minister says #NevilleSouthall in defense of Everton Goalkeeper #EFC
#PLStories – West Ham defender #VladimirCoufal clarifies he is not COVID positive #CoronaVirus #WHUFC
We use cookies on our website to give you the most relevant experience by remembering your preferences and repeat visits. By clicking “Accept”, you consent to the use of ALL the cookies.
Do not sell my personal information.
Cookie settingsACCEPT
Privacy & Cookies Policy