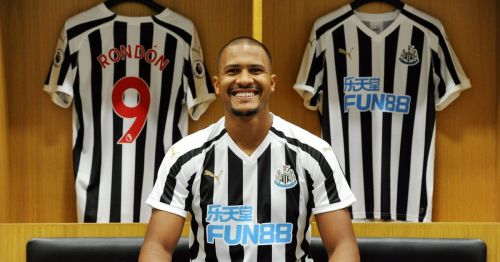 Former Newcastle United striker Salomon Rondon has insisted that he is keeping an eye on the takeover stories of his former club and if an opportunity is presented to him for a return to St.James Park, he would surely consider the offer. In his one season on loan from West Brom, Rondon made quite an impact at St James’ Park and became the first forward since Alan Shearer to win the club’s player of the year award. Rondon had hoped to extend his stay on Tyneside but knew his chances of doing so ‘were going down straight away’ once Rafa Benitez decided against signing a new contract. The 30-year-old ended up following Benitez to China last summer, but he is certainly keeping an eye on takeover developments at his former club.

Salomon Rondon said: “If they gave me the opportunity to come back to Newcastle, I would not have any doubts in coming back. In this time, this part of my career, you have to talk about the project, the future, how important it is to make a very good plan for the future. I read some news about the owner maybe selling the club so we have to wait because for me if the project mentioned is real, the people coming to invest in a good team for Newcastle will be a very good opportunity for the fans and for the history of the club.”

#PremierLeagueStories – Crystal Palace #CPFC #PatrickvanAanholt admits missing football during #Coronavirus lockdown
#PremierLeagueStories – West Ham’s #WHUFC #AaronCresswell Speaks Out Against the restart of #PL
We use cookies on our website to give you the most relevant experience by remembering your preferences and repeat visits. By clicking “Accept”, you consent to the use of ALL the cookies.
Do not sell my personal information.
Cookie settingsACCEPT
Privacy & Cookies Policy