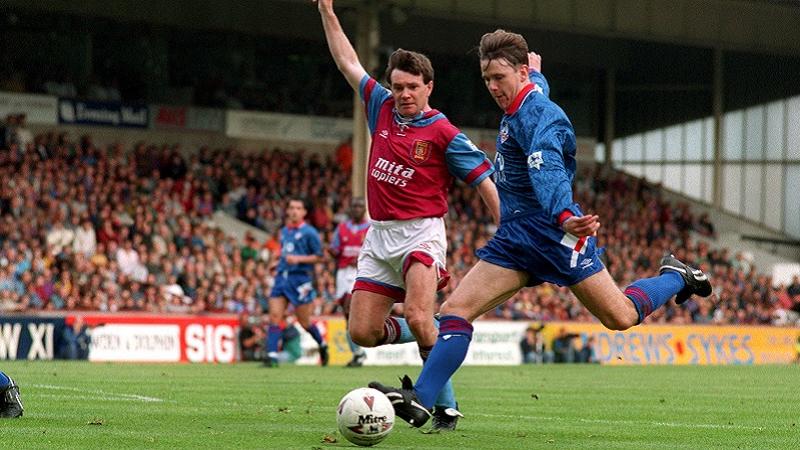 Self Confessed Liverpool fanatic Nick Henry’s goal for Oldham officially ended Aston Villa’s title hopes and gave Manchester United their first title in 26 years. He admitted later on that he was gutted about what his goal meant in the larger scheme of things.

Nick Henry said “I’ve got the goal that won the championship and I am not happy – I’m a Liverpool fan.”

There was an air of resignation about Villa from the first minute and they did not look like a side that believed that they could win the premier league. And after the match, their manager admitted that.

Ron Atkinson said “I sensed something earlier this week and didn’t do anything about it. I felt a number of our players thought the championship was beyond them and it showed today. But my congratulations go out to them (Manchester United), it gets the monkey off their back. I just hope Robbo (Bryan Robson) has played enough games to qualify for medal – that’s what will please me most.”

Micky Quinn ended Coventry’s away day goals famine with a stunning 25-yard lob but former Aston Villa striker Tony Cascarino had the last laugh in the game. Quinn embarrassed the Russian keeper Dmitri Kharin for Coventry’s first goal away from home since February 4 to cancel out John Spencer’s 14th-minute opener.

But Bobby Gould’s side was caught napping by Cascarino when Darren Barnard provides a pinpoint assist for the winner. The win took Chelsea back into the top 10 in the table.

Geoff Thomas boosted Palace’s survival bid after missing the home defeat by Manchester United following the death of his father. Ipswich was without their fullbacks Eddie Youds who was suspended for the match as well as Gavin Johnson who had a knee injury.

Steve Palmer was named in the 16 man squad after a four-month lay off via a thigh injury. Palace moved to 18th after the crucial win and was certain to beat the drop that season. Whereas Ipswich’s hopes of finishing the season in the top half of the table practically ended after the defeat.

Brian Clough kissed a tearful goodbye to Nottingham Forest as his 18-year reign at the club came to a close with relegation from the premier division. Great waves of emotion greeted Clough as he emerged from the tunnel and when a girl fan handed him a single red rose the occasion got to him and the tears began.

But Sheffield United went ahead via Glynn Hodges and sealed the future of Nottingham Forest in the second division eight minutes to the team with the second goal via Brian Gayle. Ugly scenes were visible in the 86th minute after Brian Deane had pushed Nigel Clough to the floor.

Other Results that match day

#PLHistory #premierleaguestories #PL on May 1 1993 – I can’t be sympathetic to my former club Oldham said #EarlBarrett of Aston Villa
#PLHistory #premierleaguestories #PL on May 3 1993 – Manchester United #MUFC confirmed as new premier league champions
We use cookies on our website to give you the most relevant experience by remembering your preferences and repeat visits. By clicking “Accept”, you consent to the use of ALL the cookies.
Do not sell my personal information.
Cookie settingsACCEPT
Privacy & Cookies Policy