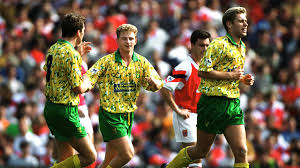 As Norwich and Manchester United were getting ready to fight it out for the top spot in the premier league, one man was eager to put his horrendous time at Old Trafford behind him and thanked his new team for showing faith in him. If Norwich could beat the red devils that would have opened up a 5 point gap between them and Manchester United.

Mark Robins said “I needed first-team football, but when the manager bought Dion Dublin it seemed obvious there was no place at the club for me. I held on a bit, hoping things would break for me and turned down a move to Germany, but when Norwich City came in I realized my chances of first-team football at Old Trafford had gone. There is no other club like Manchester United but at Norwich, there are plenty of good players and there is a great spirit to the dressing room.”

#PLHistory #premierleaguestories #PL on April 3 1993 – Nottingham Forest Fired Up to Halt #AVFC Title Charge according to #NigelClough
#PLHistory #premierleaguestories #PL on April 3 1993 – #HowardKendall thanked “True Evertonians” for sticking with the club in a tough season
We use cookies on our website to give you the most relevant experience by remembering your preferences and repeat visits. By clicking “Accept”, you consent to the use of ALL the cookies.
Do not sell my personal information.
Cookie settingsACCEPT
Privacy & Cookies Policy