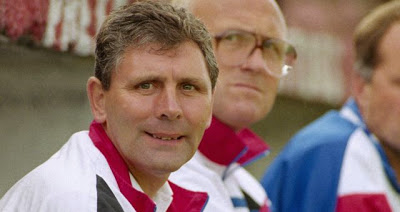 Former Chelsea manager, Ian Porterfield said that he was shocked and disappointed after being shown the door at Stamford Bridge.

Ian Porterfield said, “I did not know I was out until 2.20 pm when the chairman called me in. I had gone to work as normal and take the training. I am due to meet Chelsea’s chief executive Collin Hutchison and I’m confident I will be offered a fair settlement on the remainder of my contract. But I was shocked and very disappointed to be told by Ken Bates that the club needs a change of manager”

Porterfield became the latest manager to get the sack at Chelsea who was chasing their first major trophy in 22 years.

#PLHistory #premierleaguestories on Feb 18 1993 – #Relegation is the only talk left admits #BrianClough
#PLHistory #premierleaguestories on Feb 18 1993 – #GraemeSouness defends #Jamaica born #JohnBarnes as #Englishfans boo him at #Wembley
We use cookies on our website to give you the most relevant experience by remembering your preferences and repeat visits. By clicking “Accept”, you consent to the use of ALL the cookies.
Do not sell my personal information.
Cookie settingsACCEPT
Privacy & Cookies Policy