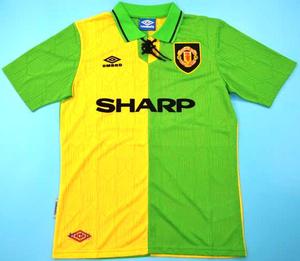 Manchester United was trying to step back in time in their bid to land the elusive title by going back to a new jersey, that had roots in 1878. The Red Devils were preparing to launch a yellow and green original Newton Heath away strip later that month.

United was formed in 1878 as Newton Heath LYR, they turned pro seven years later before adopting their current name in 1902.

#PLHistory #premierleaguestories on Feb 2 1993 – We must stop worrying about other teams – #KennyDalglish on his side’s faltering title chase
#PLHistory #premierleaguestories on Feb 3 1993 – Blackburn Rovers stumble again as title challenge slips away with hero #NigelMartyn saving penalty
We use cookies on our website to give you the most relevant experience by remembering your preferences and repeat visits. By clicking “Accept”, you consent to the use of ALL the cookies.
Do not sell my personal information.
Cookie settingsACCEPT
Privacy & Cookies Policy