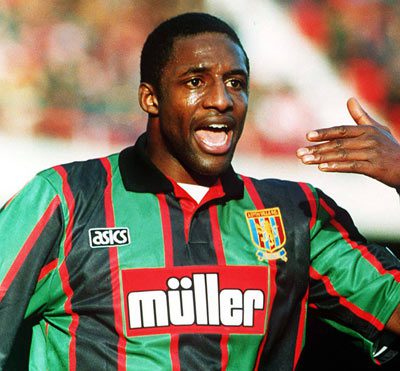 Wimbledon striker John Fashanu was in hot waters and was staring at FA rap after the televised clash with Blackburn defender Kevin Moran. Fashanu was caught by BBC TV cameras clearly making contact with Moran who left with a suspected fractured nose and furiously accused Fashanu of deliberately causing the injury.

Arsenal’s Ian Wright was banned for three matches a week earlier for a similar incident where he tried to injure Tottenham’s, David Howells. Wimbledon’s Vinnie Jones was already punished heavily that season for admitting in a tv documentary “Soccer’s Hard Men” that he used cheating and violence in football matches to win.

#mustread #PremierLeagueStories on Jan 11 1993 – I have only heard #EricCantona speak a single word since coming here – #SteveBruce
#mustread #PremierLeagueStories on Jan 12 1993 – Ipswich Town FC given green Light to keep #BonchoGenchev
We use cookies on our website to give you the most relevant experience by remembering your preferences and repeat visits. By clicking “Accept”, you consent to the use of ALL the cookies.
Do not sell my personal information.
Cookie settingsACCEPT
Privacy & Cookies Policy