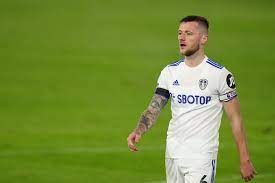 Leeds United were leapfrogged by Ralph Hasenhuttl’s Southampton side on Saturday afternoon as the Whites fell to a 1-0 defeat. The scoreline could have been deemed a flattering one given the volume of opportunities Southampton had, particularly in the first half. Leeds went in at the break with just a solitary shot at goal, taken from 30 yards which flew wide of the mark. In the end, Leeds recorded just 0.44 xG on a disappointing afternoon – the lowest of all other Premier League sides who played on Saturday. Speaking after the match, club captain Liam Cooper was visibly disappointed with his team’s performance as he spoke to the media.

Liam Cooper said: “We conceded the first half – that’s as abrupt as it is. [We were] Not at it first half, didn’t win first balls, didn’t win second balls and when you come to an away ground like this you’re going to struggle. Second half I thought we played well, started the half well and then concede on the counter-attack. You go one behind in this league and it’s always hard to get back into the game, but we stuck at it. I suppose that’s the only positive we can take, really. You can’t go giving first-half performances away like that and we’ve got to learn from it, which we do. Obviously we’re missing a couple of players but that’s how it is, that’s just how it goes. We’re back in Monday, we’ll analyse it and put it right for next week.”

Posed with the question of Raphinha and Kalvin Phillips’ absences potentially affecting the team’s fluidity and potency,

Liam Cooper said: “Always [difficult]. You take two of the dominant players out of any team in the league, they feel it. We don’t use that as an excuse, we can’t use it – the lads train every single game together and whoever comes in is expected to reach those standards. We have belief in everybody. You lose those sorts of players, you’re going to feel it a little bit.”

Next, Leeds face Wolverhampton Wanderers at Elland Road where the hope will be for three points and a return for those who missed the action at St Mary’s Stadium. Cooper vowed that the team would look back upon their mistakes on the south coast.

Liam Cooper said: “We’ve got to expect that, we’ve got to do that [bounce back]. We’ll relax tomorrow, back in Monday and we’ll analyse where we went wrong and what we’ve got to do to put it right. If there’s any team in the league who’s going to analyse it and put it right, it’s us. We’ll train next week and go try and get a result [against Wolves].”

#PLStories- Brighton boss Graham Potter reviews goalless draw at Norwich City #BHAFC
#PLStories- Brendan Rodgers praises James Maddison as Leicester dismantles Manchester United #LCFC
We use cookies on our website to give you the most relevant experience by remembering your preferences and repeat visits. By clicking “Accept”, you consent to the use of ALL the cookies.
Do not sell my personal information.
Cookie settingsACCEPT
Privacy & Cookies Policy