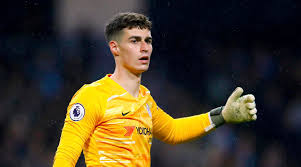 Former Chelsea back-up Rob Green has suggested that Kepa Arrizabalaga, who signed for a world-record fee for a goalkeeper from Athletic Club in 2018, needs to knuckle down and get back to his best. Green has backed the Spaniard suggesting the 25 year old is not finished at the highest level and can still turn out to be one of the best keepers in the game.

Green said: “We’re saying Dean Henderson is one for the future, he’s 23, Kepa is 25, it’s not like he’s a million miles away. But because of that price tag, you’re expecting that bit more. That’s the immediate assumption, he’s not the finished article, that was never the case with Kepa.”

#PremierLeagueStories – Chelsea #CFC #ChelseaFC striker #TammyAbraham says he misses football and scoring goals
#PremierLeagueStories – Southampton #SaintsFC manager #RalphHassenhuttl has been taking advice from German managers on how to train players in small groups
We use cookies on our website to give you the most relevant experience by remembering your preferences and repeat visits. By clicking “Accept”, you consent to the use of ALL the cookies.
Do not sell my personal information.
Cookie settingsACCEPT
Privacy & Cookies Policy