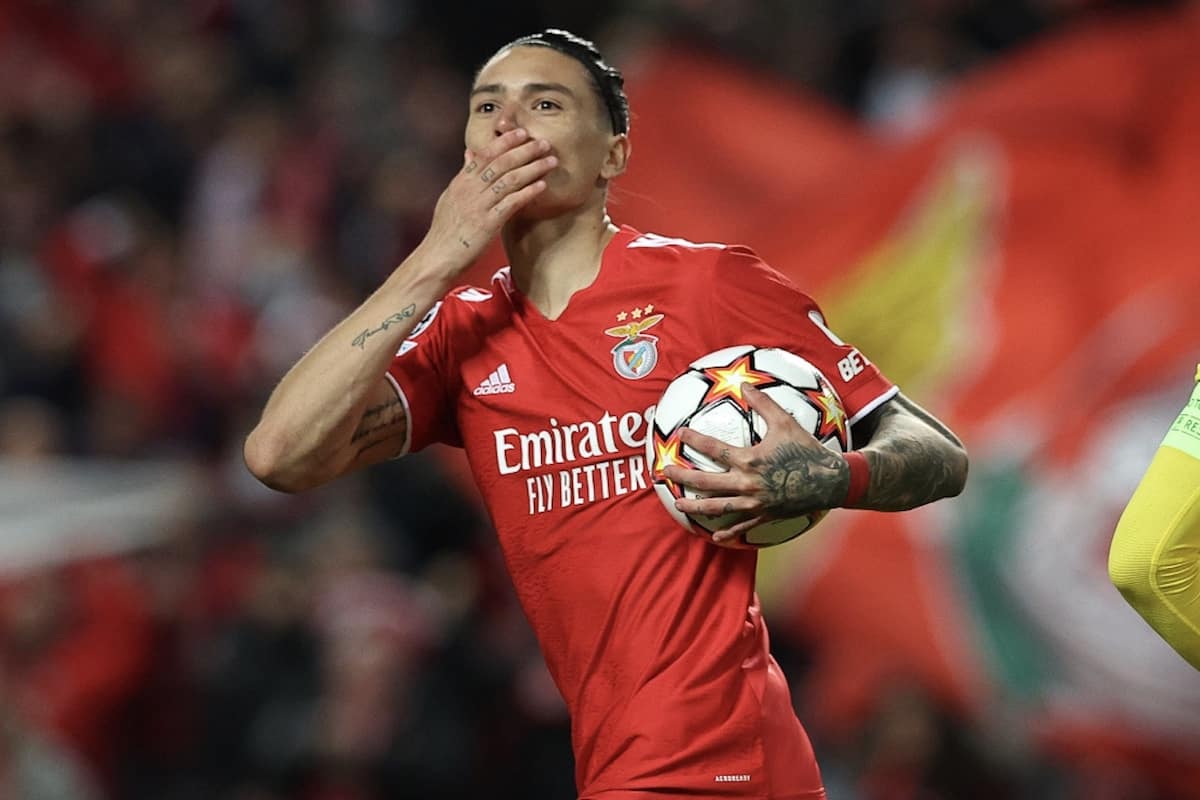 Striker Darwin Nunez has endured a difficult start to life at Liverpool following his £64m transfer from Benfica earlier in the summer.  Based on the criticism he’s received in recent weeks, you’d be forgiven for thinking he’s been at Liverpool much longer than the couple of months he’s been a Red. The reality of the situation is, he’s played just shy of 260 minutes of football in all competitions so far and is still finding his feet in a new team, new league and new country. He had a slow start to life at Benfica when he joined from Almeria in September 2020 and faced similar criticism before he went on to set the league alight. In his first season in Portugal, Nunez scored just six league goals and didn’t find the back of the net until his fifth game in the competition. Last term, however, he ended the campaign as the Primeira Liga’s top goalscorer with 26 and also helped them to the quarter-finals of the Champions League with six goals – a significant improvement on his first season with the club.

Arguably the greatest compliment for the player is the fact some of the best strikers in the world admire him and former Red Luis Suarez is among them. The 35-year-old scored 82 goals in 133 appearances for the club before he joined Barcelona and he’s previously opened up on why he wanted the La Liga giants to sign Nunez, who was only 21 at the time.

The veteran is seemingly doing his bit to help the new Liverpool recruit too, as he set up a goal for Nunez on Tuesday when Uruguay faced Canade. Suarez isn’t the only ex-Liverpool player that’s spotted something special in Nunez. Defender Jamie Carragher has also backed the striker to succeed at Anfield and warned against judging him off so few appearances.

Jamie Carragher said “I would have found him a handful,” Carragher told the Daily Mail earlier this month. “I think anyone would. It is just where Liverpool can have that connection with him. But the size, the pace, the power of him, he has a great goal-scoring record, you don’t want to be coming up against him too often. It is just the next five or six weeks we will see that integration a lot more. It will be a lot easier then to judge whether he is the right fit, because now he has just not played enough football for the team.”

Those that have worked with Nunez previously have also backed him to come good at Liverpool. Sports psychologist Evandro Mota, who worked alongside the striker at Benfica, has recently shared how taken aback he was at the player’s maturity for such a young age.

Evandro Mota said “When an athlete has the guts to admit he needs some help, it’s so much easier to work with him. That’s Darwin, a boy way ahead of his age who always kept an open mind and was willing to listen to the right people. When people are dealing with so much criticism, we suggest it’s best if they isolate themselves from the environment that’s doing them harm. Darwin is a kid who demands a lot for himself and realised the social media stuff would only bring him down. Darwin said, ‘Look, I know I have a lot to learn and to keep gaining experience’. This from a 21-year-boy. I’ve been working with some of the best football talents for more than four decades – do you know how many times I’ve seen a youngster being this mature and humble at this age, even after fulfilling his dream of helping his parents buy a home? Very, very few times.”

The world of football twitter nowadays sees players judged after just a handful of appearances. Instant impact has become an expectation and anything less is frowned upon on social media. Nunez turned off the comments on a recent Twitter post while away on international duty and all of his Instagram comments have been restricted since he joined up with Uruguay last week.