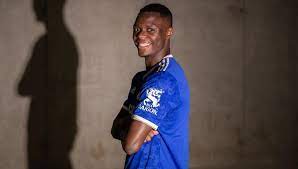 Patson Daka had to be reminded by Brendan Rodgers why he’s been signed by Leicester City at half-time of their 1-1 draw with Brighton. Daka scored City’s goal in the game, slamming in a rebound less than half a minute into the second half.

Brendan Rodgers said: “He’s a goalscorer. I said to him at half-time: ‘You need to sprint.’ You’ve been brought to the club to sprint. In the first half he was a little bit passive for me. That’s his strength, because he’s solid technically, but it’s his sprinting, it’s his pressing. And at the beginning of the half he got onto the ball and finished it really well. He gives everything for the team, he ran himself into the ground, and it was a shame he had to come off.”

In his post-match press conference, Rodgers suggested Daka’s problem at the end of the game was merely cramp, but in any case, he has two weeks to recover before the club’s next game, an FA Cup fourth-round tie against Nottingham Forest.

#PLStories- Newcastle United defender Kieran Trippier hails Diego Simeone for his improvement at Atletico Madrid #NUFC
#PLStories- Patrick Viera on Crystal Palace difficult phase and improving squad during January transfer window #CPFC
We use cookies on our website to give you the most relevant experience by remembering your preferences and repeat visits. By clicking “Accept”, you consent to the use of ALL the cookies.
Do not sell my personal information.
Cookie settingsACCEPT
Privacy & Cookies Policy