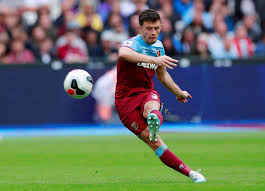 West Ham backed up their Europa League win over Genk with a fine 1-0 victory over Tottenham that both David Moyes and Declan Rice called ‘resilient.’ The Hammers European campaign could not have got off to a better start with three wins, seven goals scored, none conceded and a six-point gap at the top of Group H. However, on their return to Premier League action after the opening two matches Moyes’ team fell to 2-1 defeats to Manchester United and Brentford. Both matches were late defeats and on neither occasion was Moyes too worried as the performance from his team had shown no sign of fatigue. Bar a Mark Noble penalty miss and a late defensive lapse from Angelo Ogbonna both matches would have ended with a share of the points. Despite the positives in defeat, the win against Spurs was important not just for bragging rights but to put to bed any questions over whether West ham could back up a European match with a Premier League win – as Aaron Cresswell pointed out.

Aaron Cresswell said: “I don’t think we’re a team where just because we played Thursday we’re automatically tired on a Sunday. We made some changes Thursday night and we’ve got a great team spirit here, we’re not going to say we can’t have that fast start or togetherness because we played Thursday. That’s what we’ve got to do throughout the competition as long as we’re in it.”

The win over Spurs was West Ham’s third in a row since the last international break and Cresswell was thrilled with the form his team are showing over the last week.

Aaron Cresswell added: “It has been really positive. The three we played have been tough games, starting off at Everton where we were fantastic and deserved more goals. To take it into midweek, 3-0 and another clean sheet and then another with three points today. A really positive week.”

With the Hammers going well in Europe, sitting in fourth in the Premier League and planning to take on Manchester City in the Carabao Cup on Wednesday night the squad Cresswell was asked if the squad are capable of competing on all fronts.

Aaron Cresswell replied: “Yeah of course, what’s the point in playing in these competitions if we’re not going to compete? The mentality we’ve got as a group, it doesn’t matter who we’re playing against we’re always going out to win and as long as we’ve got that mentality we’ll be okay.”

#PLStories- David Moyes hail Michail Antonio form after striker nets again for West Ham #WHUFC
#PLStories- Oliver Skipp disagrees with Nuno Espirito Santo and Harry Kane over key problem for Tottenham #THFC
We use cookies on our website to give you the most relevant experience by remembering your preferences and repeat visits. By clicking “Accept”, you consent to the use of ALL the cookies.
Do not sell my personal information.
Cookie settingsACCEPT
Privacy & Cookies Policy