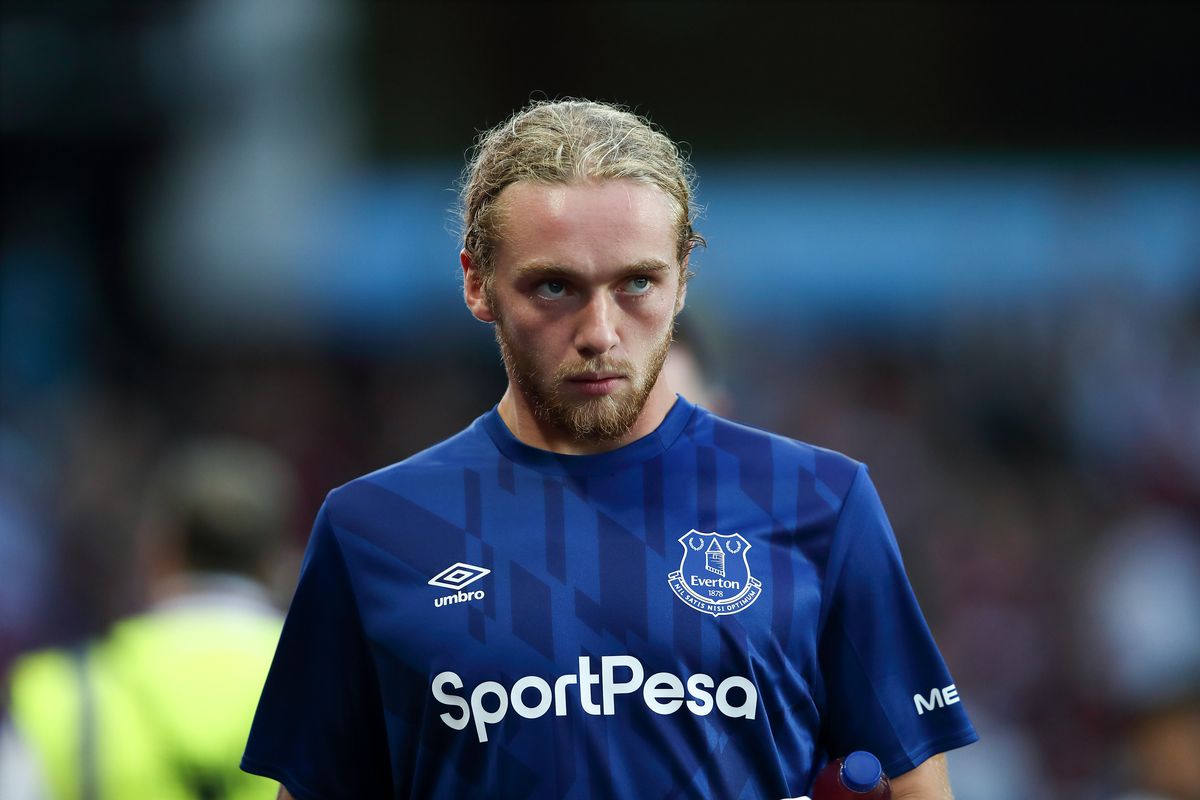 Everton have revealed a new limited edition warm-up shirt inspired by its fanbase in the USA ahead of Saturday’s clash against Watford. The two-tone blue shirt, featuring the stars and stripes famously emblazoned on the US flag, and will be worn by the squad as they warm up at Goodison Park this weekend. A limited number of the shirts have been made available for members of Everton’s US Supporters’ Clubs and US-based Everton Official Members to buy from Thursday, before the shirt goes on sale via evertondirect.com and in Everton’s club stores from 3pm BST (10am Eastern Time/7am Pacific Time) on Friday 22 October. The release also coincides with the latest NBC Premier League Mornings Live fan festival which will see Everton host a live event following the Watford match.

Tom Davies said: “There’s definitely a special connection between Everton and our fans in the United States. Me and Dom went to New York Fashion Week last year just before the pandemic hit and we met Evertonians at the airport, at a museum, at a fashion show we went to – there were Toffees everywhere we went. It’s great for us as players to know we’ve got such strong support in the United States, and we know the effort lots of those fans have made to get over to Goodison Park and watch us live. That obviously hasn’t been able to happen over the last year or so but we can’t wait to see them when they are able to travel over again, hopefully very soon. In the meantime, I think this shirt is a great way for us to acknowledge that support from the States and I really hope the fans over there like it.”

The Blues also have a thriving network of affiliated Supporters’ Clubs in the USA, covering more than 30 states. Since becoming Everton’s Technical Partner in May 2020, hummel have forged a close relationship with those Supporters’ Clubs, working with them to produce bespoke Everton merchandise featuring a number of different Supporters’ Club logos.

Allan Vad Nielsen, hummel’s CEO, said: “Having created such a strong bond with Everton fans in the United States, we wanted to do something that would specifically recognise their support and passion for the football club, but also celebrate the historic ties that have linked Everton and their country going back over a number of decades. In using the iconic Stars and Stripes, we believe we have produced a shirt that is an obvious celebration of that US connection the club has, but one that, through its style and colour scheme, remains classically Everton. We hope the design is well received and look forward to strengthening our friendship with Evertonians in the States even further in future.”

#PLStories- Thomas Tuchel talks about signing Erling Haaland to partner with Romelu Lukaku #CHELSEAFC
#PLStories- Thomas Tuchel gives Injury update on Romelu Lukaku #CHELSEAFC
We use cookies on our website to give you the most relevant experience by remembering your preferences and repeat visits. By clicking “Accept”, you consent to the use of ALL the cookies.
Do not sell my personal information.
Cookie settingsACCEPT
Privacy & Cookies Policy