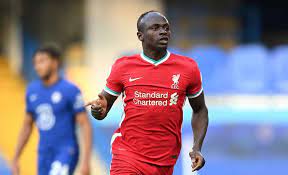 Sadio Mane says the problems he encountered last season are now firmly behind him at Liverpool. The Senegal star endured a dip in form and a crisis of confidence as an injury-hit Reds squad struggled in the absence of the intensity provided by full Premier League crowds. Such was Mane’s drop-off that he admitted to undergoing tests in an effort to find the root of the problem and return to the sort of performances that placed him inside the top five of the 2019 Ballon d’Or list.

Sadio Mane said: “I even underwent a test to take a look at my body,”

However, after registering his sixth of the campaign in Saturday’s 5-0 hammering of Claudio Ranieri’s Watford, Mane – whose goal was number 100 in the Premier League – believes those worries are now consigned to the past.

Sadio Mane said: “It was hard for myself but it was hard for the team and sometimes that’s normal but that’s all behind us now. I said from the beginning now that it can be a different season for all of us and you can see that. So hopefully we are going to go for the titles, which is our dream, that’s what we are looking at and what we are working for.”

With 22 goals between them in all competitions already this term, Liverpool’s front three of Mane, Mohamed Salah and Roberto Firmino are looking sharper than ever. It’s the most they have scored as a three-pronged attack at this stage of any season together at Anfield and Mane is enjoying himself on the left of Jurgen Klopp’s frontline.

Sadio Mane added: “I think we started very well, played really well, created many chances and scored five goals. We deserved to win. I’ve always said it’s very easy to play up front with these two guys. They are two of the best players in the world and I think we cause defences many problems. I think by moving quick, dropping deep, making runs and that makes the difference. Hopefully we are going to keep going like this and score as many goals as we can for the team until the end of the season.”

Despite Firmino’s hat-trick in the rout at Vicarage Road, much of the plaudits were once more spread at the feet of Salah after another superb goal for his growing collection. Klopp declared his No.11 to be “the best in the world” after the game but Mane is not surprised by the form of his team-mate.

Sadio Mane said: “Of course, I think it is you guys who are surprised – but not me because we all know his quality. We know how he can move the ball, he showed it against Manchester City, which was another great goal, so for him to score goals like this is normal. It was a very wonderful goal and I am very happy for him.”

Next up for Liverpool is a trip to Atletico Madrid in the Champions League as they look to move on to nine points in Group B at the Wanda Metropolitano. The Reds will have Alisson Becker and Fabinho available again after they flew straight to the Spanish capital after being in the Brazil squad for a game against Uruguay in the early hours of Friday morning, UK time.

Sadio Mane said: “It’s always easier if you have these kinds of players and for us it’s not a problem because we know how good they are. Having them back in the team is an extra thing for us. They have been here for years so this is not a problem for them because they are two of the best players in the world so it will be easy for us and to get them back in the team will help us a lot.”

#PLStories- David Moyes shares insight on West Ham’s win over Everton and Declan Rice superb performance #WHUFC
#PLStories- Pep Guardiola believes Bernardo Silva could change his mind about Man City future #MCFC
We use cookies on our website to give you the most relevant experience by remembering your preferences and repeat visits. By clicking “Accept”, you consent to the use of ALL the cookies.
Do not sell my personal information.
Cookie settingsACCEPT
Privacy & Cookies Policy