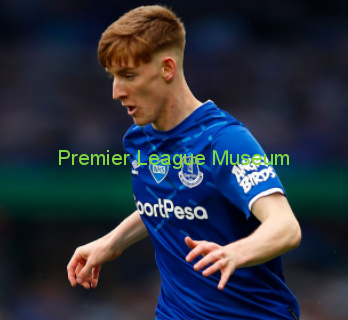 Anthony Gordon has opened up on the pressure of being a local player in the Everton side and explained why Rafa Benitez’s style suits him. The winger earned his first Premier League start of the season shortly before the international break during the Blues’ 1-1 draw away to Manchester United. The 20-year-old is aiming to work hard and stay in his manager’s plans for the future after his name was chanted by the travelling support when he was substituted at Old Trafford. But Gordon believes that younger players are judged to a higher standard, even if he is enjoying the pressure of it right now.

Anthony Gordon admitted: “It is unbelievable. I am very local, I’m from literally two minutes away from the stadium and just day to day people coming up to me and stuff and just normal people thinking something of me is unbelievable. As a local lad you are judged to a higher standard because the fans expect more of you. No-one holds me to a higher standard than I hold myself. People can hold me to as high a standard as they want because it won’t be as high as that to which I hold myself.”

Gordon was handed his debut by Carlo Ancelotti in January 2020, coming off the bench at half time of a match against West Ham at the London Stadium. Now working under Benitez, the winger believes that the style preferred by the latter does suit him better as a player.

Anthony Gordon added: “I’ve had a good few coaches, haven’t I? Rafa and Carlo are probably top 20 ever, I don’t want to leave anyone out. To have them at such a young age is incredible and an amazing experience and I’m only getting better off that. Yeah I think it [Benitez’s style] suits me more, he’s very intense and we play on the counter attack. I’m a short, sharp player where I’m quick over the first few yards. It benefits me and I can let my legs go and have a good couple of runs during the game.”

Gordon has also praised Everton’s squad and other coaches, including Leighton Baines and Duncan Ferguson, for helping him settle into the senior environment as quickly as he has.

Anthony Gordon said: “There’s a balance between being shy and being over-confident. That’s partly down to them (the squad) embracing me. Leighton embraced me as soon as I came up. He saw I was a good player and he always tried to help me at every opportunity – and still does. Duncan is the same. He’s a great character, a great coach, a bad referee. I can only thank them for embracing me the way they did when I came up (into the first-team squad).”

#PLStories- Paul Pogba admits Manchester United deserved to lose against Leicester #MUFC #LCFC
#PLStories- Ralph Hasenhuttl feels he was ‘misunderstood’ over FA charge #SAINTSFC
We use cookies on our website to give you the most relevant experience by remembering your preferences and repeat visits. By clicking “Accept”, you consent to the use of ALL the cookies.
Do not sell my personal information.
Cookie settingsACCEPT
Privacy & Cookies Policy