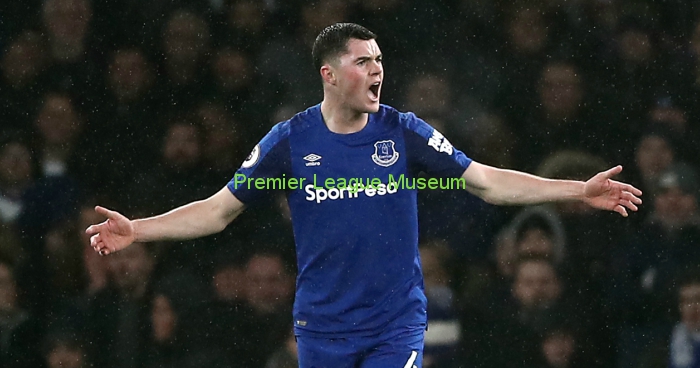 Michael Keane has set his sights on more Everton goals and hailed the decision by Rafa Benitez to tweak his side’s formation during Monday’s win over Burnley. After a slow start, the Blues fell behind just after the restart when Ben Mee headed home on his 200th appearance for the Clarets. However, the Blues soon rallied and were level just seven minutes later thanks to Keane’s header before Andros Townsend fired his side ahead with an unstoppable strike. Then just a minute after Townsend’s screamer, Abdoulaye Doucoure’s lovely through ball found Demarai Gray, who tucked past Nick Pope for his third goal of the season. And Keane has now set his sights on becoming a more regular source of goals for his side and believes he has the potential to improve on his tally.

Michael Keane said: “I have a target in my head, as I do every year. I know I’m capable of scoring goals, I just need to get in the right positions and make good runs and they’ll come. Thankfully I’ve done that tonight and hopefully it can continue. It was a similar game to Southampton [on the opening day of the season]. I think we were disappointing in the first half – they had too much space, we struggled to get to grips with the game a bit but we hung on in there. Then we conceded in the second half, but I thought we reacted really well. It’s always important when you do concede to try to get that goal as soon as you can. I got into a bit of space, I saw it and I knew from training where Andros puts those crosses when he cuts back on to his left foot, so I just got in the right place, it was a great cross and I managed to guide it in to get us back in the game. We had a 15-minute spell where I thought we were top class – and I thought we could have actually had more.”

Everton started with a five-man defence on Monday in a switch from the previous formations they have played so far this season. But in the immediate aftermath to Keane’s equaliser, Benitez opted to change things by introducing Andre Gomes in place of Ben Godfrey. The Blues then switched to a back four with Gomes’ introduction allowing Doucoure to push further forward.

Michael Keane said: “Obviously, it’s different in terms of positioning. I think we got on top of the game more when we went to a four at the back and had an extra man in midfield, because I think they were over-running us a bit in the first half. I think it worked well. Overall we looked solid with three at the back, obviously we conceded from a second phase and a set play which is disappointing, but I thought four at the back gave us a bit more going forward. As defenders, we always want to keep a clean sheet. We know a team like Burnley are really good on set pieces so it’s something we worked on and were focused on, so it’s disappointing to concede in that way but the main thing is that we won the game and there are always going to be things to work on and hopefully we can do better [in that respect].”

The win extended Everton’s unbeaten start to the season and moved them level on points with Manchester United, Chelsea and Liverpool in the Premier League table. Next up for Keane and his side is a trip to the Midlands to take on Aston Villa at the weekend before the Blues face Queens Park Rangers in the Carabao Cup third round on Tuesday.

Michael Keane said: “It’s really good. When you’re doing well, winning games, it’s all about momentum and you want that next game to come as soon as possible. The whole squad is raring to go. There are lads who didn’t play tonight but we’ve obviously got a lot of games coming up and we’re going to need everyone. I’m sure the manager will make changes at some point and everyone will be used. We all can’t wait.”

#PLStories- #PepGuardiola asks more Man City fans to attend Southampton fixture #MCFC
#PLStories- #Jorginho opens up on his incredible 2021 and his rapid ascent under #ThomasTuchel at Chelsea #CHELSEAFC
We use cookies on our website to give you the most relevant experience by remembering your preferences and repeat visits. By clicking “Accept”, you consent to the use of ALL the cookies.
Do not sell my personal information.
Cookie settingsACCEPT
Privacy & Cookies Policy