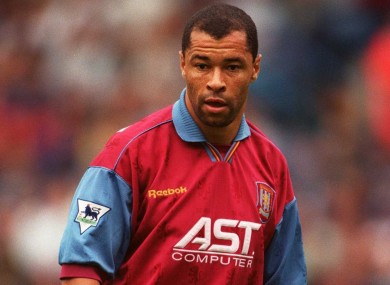 Paul McGrath has reiterated his love for Aston Villa while sharing poignant memories of his former managers, Graham Taylor and Ron Atkinson.

Paul McGrath said “I think that they (fans) thought I just wanted another pay day and wanted to take as much off the club as I could and just ride off into the sunset, but I loved the club. Villa is a place that a lot of players like playing at, they had a lot of the semi-finals there and all that sort of stuff, so loads of footballers if you asked them, they loved to play at Villa Park. For me, playing there week in, week out, I went with Villa and Graham Taylor was so good to me, he was so, so good to me and Doug Ellis too. They said that they’d double my wages, and I went, ‘you’ll double my wages and give me more, this is brilliant’. I realised they wanted me to play for the club so much that they were willing to do these things for me so I thought I’d give it my best shot.”

During the late 1980s, McGrath was offered a contract at Italian side S.S.C. Napoli, but the deal did not come to fruition. Instead, the centre-back began his story at B6 by signing under former Villa boss Taylor in August 1989, of whom he played some of the best football of his career for.

Paul McGrath said “I was struggling with the fact that I was at a new club and they were all expecting me to do things their way and go out on the football pitch and do certain things, I went to the physio, Jim Walker, and I said to him that I don’t usually train the same ways as the other players train. I loved going into the gym and keeping myself fit, going on the bikes because my knees are now a little bit shot to pieces. They cut down my training sessions and made sure I was fit going into every Saturday. Graham Taylor even came to me and he said that he had a word with his wife and asked if I wanted to stay in their house. I had a quite serious thing happen while I was on a downer basically, so Graham came to me and just said, ‘Paul, if you want to come with myself and Rita you’re welcome to do that and we’ll get you right and get you well again’.

Paul McGrath said “I just thought this man was a saint. I didn’t go, but I did start repaying him in the performances that I was giving after that and I hope he feels the same way. Jim Walker and McBurn, they both had a joint venture together and what they did was make arrangements even for Ireland, who’s going to drop me for which plane and Jim would come on the plane with me. It was all brilliantly laid out and I could concentrate on just waking onto the football pitch and doing the best that I could for all the people who were doing the best for me.”

Following Taylor’s fist tenure in the Villa Park hot seat, Jozef Venglos only lasted one season before Ron Atkinson took over in July 1991, in time for the start of the 1991/1992 campaign – the final First Division season. Asked if the Atkinson era was his favourite time at Villa,

Paul McGrath said “I think so. We had Dean Saunders then, Dalian Atkinson, there were so many players who wanted to play for Aston Villa. You had Tony Daley, Dwight Yorke, we were always going to score goals but it was just about how many and sometimes they’d just rip teams apart, five goals here, six goals there. If we let in one, then the other team did well. We just concentrated on not letting goals in and defending and suddenly we went flying up the league.”

At the end of Villa’s second season under Atkinson – the first Premier League campaign in 1992/93 – McGrath was awarded the PFA Player of the Year for his stellar performances. Only six defenders have won the prestigious award in the last 40 years, with Liverpool’s Virgil Van Dijk the last winner.

Paul McGrath said “Bobby Charlton presented it to me. He used to stop me and tell me to get my act together because I was a good player and he gave me good advice, forget what people say off the pitch just focus on what you do on it.”

McGrath will be forever etched into Vila folklore for his all-action, committed and classy displays which helped him earn the nickname ‘God’ amongst the Villa Park masses. The Irishman was keen to make a lasting impact at Villa upon signing in 1989, as he was handed a new lease of life away from Manchester United.

#PLStories – Manchester United superstar #CristianoRonaldo explains his ‘Siiiiuu’ celebration #MUFC
#PLStories – #LucasMoura reveals #JoseMourinho friendship and how #NunoEspiritoSanto management style is being enjoyed by Tottenham Squad #THFC
We use cookies on our website to give you the most relevant experience by remembering your preferences and repeat visits. By clicking “Accept”, you consent to the use of ALL the cookies.
Do not sell my personal information.
Cookie settingsACCEPT
Privacy & Cookies Policy