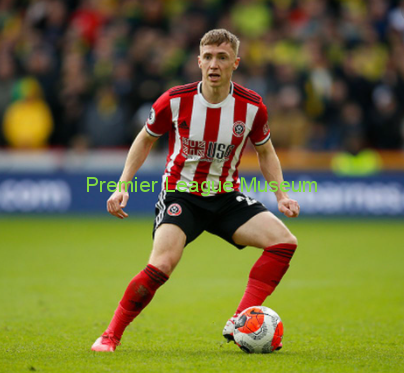 “Not good enough” is how John Egan has described Sheffield United’s season.

The Republic of Ireland international returned to the starting line-up for the first time since the 3-0 defeat to West Ham in February, but it was another disappointing night for the Blades. The 28-year-old says they must increase performance levels and try and end the season with at least some momentum ahead of the next campaign.

John Egan said: “We have seven games left to try and get some confidence back into the side,” he said. The only way you do that is by getting results and upping the performance and hopefully we can do that now. We know ourselves it’s not good enough. The only thing we can do is to try and improve and try and get better. It’s obviously very tough to take at the moment with the spell we are going through. It’s been a really tough season but the only ones who can put it right are the ones who step out on to the pitch and that has got to be the focus now. The mistakes have happened all season, we’ve really got to be better. Everyone in that dressing room has to go out there and perform better. No matter where you are you have to go out every week to try and get three points. I believe momentum in football is a big thing and we haven’t got any at the moment. We need to try and shift that momentum as quick as possible.”

#PLStories- #CarloAncelotti confirms extent of #JeanPhilippeGbamin injury #EvertonFC
#PLStories- #RalphHasenhuttl slams his players for loss at West Brom #SAINTSFC
We use cookies on our website to give you the most relevant experience by remembering your preferences and repeat visits. By clicking “Accept”, you consent to the use of ALL the cookies.
Do not sell my personal information.
Cookie settingsACCEPT
Privacy & Cookies Policy