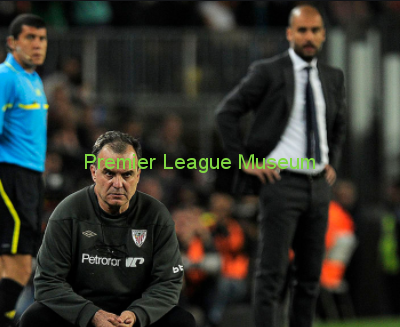 Manchester City head coach Pep Guardiola could not help but shower Marcelo Bielsa with praise ahead of Leeds United’s visit to the Etihad Stadium.

Marcelo Bielsa says your teams have a ‘magical quality because of the way you are able to come up with surprises for the opposition. I know if I give you any praise in a question you are very humble, you swat it away, but when it comes from someone like Marcelo, who you have so much respect for, does it have extra significance?

I’m overwhelmed, I feel weird. He’s a huge competitor. I’m not going to try to be weak after these words because they can do whatever they want. I’m overwhelmed. I know because he’s the most honest person. When I was able to speak with him, I’m pretty sure what he says is what he believes. He doesn’t say anything or do anything for the media, for repercussion, for himself. That’s why I’m overwhelmed because everybody knows the admiration, the respect, the way he helped me in my beginnings and he will always be in my heart. I always feel I don’t deserve it because of course if there is one person who can find the secret or the way we want to play, it is him. For his work ethic and his knowledge about the game. I know how tough it will be tomorrow at 12.30, but hopefully we are prepared to compete. because we are three games away to be champions and tomorrow we have another opportunity to make a bigger step. This is the reason why. I’m looking forward to the game, of course. The players know because we face them there in the first leg and how difficult it was and tomorrow will not be an exception. The quality of the manager and the backroom staff show in the position of the table. Being promoted last season and already safe with 42 points and still seven games left. They have done incredibly well all season.

How much credit do Leeds deserve for the style in which they’ve attacked this first season back in the Premier League?

Not just the numbers, the results, of course sometimes it’s a consequence. I’m pretty sure they deserved completely what they got so far. I admire a lot of things they do, especially how they behave on the pitch. It doesn’t matter the opponent or the competition, it is a completely different game to what we have played so far because they demand you to do something that you are not used to. But at the same time it is a challenge because we are so close – we need three more games and one draw – and when you play at home it is another opportunity. Of course, it is between important games against Borussia Dortmund but it is what we have to do.

After the draw against Leeds in October, you said that winners have a good perfume. how would you say your own team smells at the moment?

No, I would say to copy the words from Marcelo. I said that all the managers are completely alone in their defeats, the players follow you when you win and leave you alone when you lose. The winners always smell good and when you lose you always smell really really poor and really bad. It’s no secret, I completely agree about that. Every decision taken after victory is good and every decision after a defeat is not good. That’s why it is better to be calm and be honest with yourself in the decisions you have to take, for the benefit of the club, the team, the organisation and the rest. Football is being played with human beings and human beings are not perfect. That’s why you make mistakes, you accept it and do what you have to do to approach the next games.

Does this come as one of Marcelo’s great successes? Being able to implement his methods and ideology on English football and the impact he’s had here?

His teams are one team before his arrival and [another] when he is there. His teams are always better. You see his influence. He doesn’t need much time to realise his own team. These are alpha teams, they belong absolutely to him and for world football, it is a joy. A guy who respects the opponent, who plays for the fans, for the spectators, who just wants to play for a victory home or away and convinces the players to follow him the way he is being followed. That’s why I recognise the best because people say that he doesn’t win titles but give him Manchester City and he will win titles. It depends on the players you have, but always the players they have, they are always better players. That is the best proof of when a manager is good.

#PLStories- #RalphHasenhuttl says #DannyIngs still has a chance of England call up #SAINTSFC
#PLStories- #BrendanRodgers wants Leicester City to become top club and keep star names #LCFC
We use cookies on our website to give you the most relevant experience by remembering your preferences and repeat visits. By clicking “Accept”, you consent to the use of ALL the cookies.
Do not sell my personal information.
Cookie settingsACCEPT
Privacy & Cookies Policy