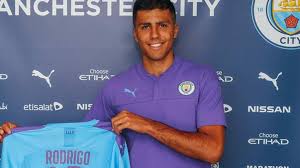 Manchester City midfielder Rodri hopes teammate Sergio Aguero joins a ‘big club’ this summer following his exit from the Etihad Stadium. The Premier League title hopefuls announced on Tuesday that the Argentine striker will leave at the end of the season when his contract with Pep Guardiola’s side expires. That will bring an end to an incredible decade in the Premier League with City, where Aguero has won a plethora of titles and established himself as the club’s all-time top-scorer.

Rodri said: “I hope he goes to a big club because that is what he deserves. He’s one of the greatest goalscorers of the last decade, there’s no doubt about it. I’m close to him, we share a friendship and I wish him all the best. I think he’s had a highly successful time at Manchester City, becoming the top goalscorer in the club’s history. He deserves a great farewell.”

Argentine outfit Independiente have already confirmed their desire to bring their former star back to the club, as revealed by coach Julio Falcioni on Tuesday.

Julio Falconi said: “We’re calling him to see if he’s interested. It would be a pleasure to manage him again. Here, he won’t be able to sign something similar to what he earns there [in Europe], but he would be back among friends, defending the colours he loves.”

Aguero made his professional debut for his hometown club at the age of just 15, before joining Atletico Madrid three years later.