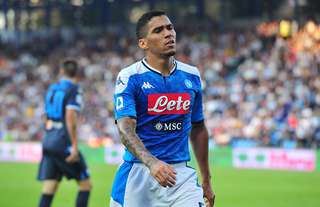 Allan is hoping success with Everton will help him convince his son to ditch his favourite Cristiano Ronaldo shirt – and wear his Blues’ one all of the time.

Asked if Miguel was his biggest fan, Allan said: “Definitely, he loves football, he is always watching football, he is always in an Everton shirt and shirts of the other teams I played for. He’s my greatest motivator, him together with my daughter at home. They are big fans of Cristiano Ronaldo so he has always had a Ronaldo shirt, however he is not allowed to have a Ronaldo Juventus shirt because they are massive rivals of Napoli, so there are a lot of Real Madrid No7 shirts at home. That is normal. The kids always dream about scoring goals and idolise the goalscorers, my son is no exception.”

Allan shaved his hair off at the beginning of the month and the £20m midfielder says his family are his greatest motivation.

Allan said: “We do everything for our children, we do everything possible to make sure they’re happy and they are safe. Without a doubt, my family are everything to me. Wherever I’ve been, back in Brazil, friends in Italy, you move clubs and come to a new cycle but the friends are always there and the family too. You always have that family strength. When you go on the pitch, they give you strength, they motivate you and drive you and you want to play to always make them happy.”

So, how does he like his head when shaved?

Allan replied: “My face doesn’t really help but it is not a problem as I am married and have three kids and my wife finds me attractive whichever way I present it [hair]”

Allan’s children are able to watch him play against after an extended spell on the sidelines with a hamstring injury. The 30-year-old will start feature in his fifth successive match on Saturday night against Manchester City

Allan said: “They were difficult times, not being able to get on the pitch, not being able to help the team in matches. I had a really strong desire to get back. Thank god the team did really well without me, getting some important victories, so I’m really happy to be back. Before the injury I was really growing into games, I was putting in some great performances together with the team but unfortunately that was interrupted by the injury. However, I believe now with day to day training, playing in games the momentum will be coming back. Particularly now I can make the most of the international break with physical work, recover this momentum and put in good performances.”