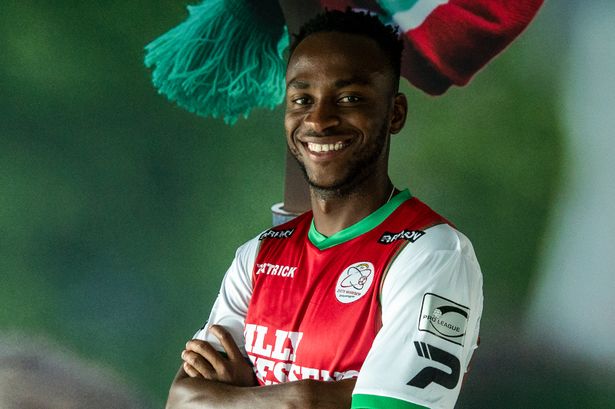 Saido Berahino has once again outlined his dream to return to West Brom one day after two years away from England have ‘cleared his head’.

Saido Berahino  said “Hopefully. I’d love to play back at West Brom. That would be my main target. I follow the club so deeply that, if I went back, I think I’d die playing for them, because that is where I fell in love with football in England. I’ve said it before. I’d love to come back to England. This holiday period for two seasons – it’s cleared my head now! I’m in a better place. I miss that morning feeling waking up knowing it’s game day. Over here, there’s a man and a dog watching us. Nobody talks about games here.”

There is an element of regret for how things played out at Albion, on Berahino’s part – and he spoke comparably fondly about his spell in the first team for the Baggies compared to the goings on under Mark Hughes and Paul Lambert at Stoke. Berahino puts that down to the dressing room that he broke into, where he was surrounded by senior players who he explained looked after him. Compare that with Stoke, for example, where Berahino claims former teammate Glen Johnson didn’t say much to him in the time they were together, but who has since dug him out on national radio about his attitude.

Saido Berahino  said “At West Brom, I had the best of both worlds, the best senior players around me… Chris Brunt, James Morrison, Youssouf Mulumbu, [Nicolas] Anelka, Gareth McAuley, Jonas Olsson, Ben Foster. They were great, they spoke to me everyday. I was the youngest in the team, there was only me really, nobody else that was around my age. They had this little brother that they used to look after, and then when I moved to Stoke, it was a totally different world. It was likely getting picked out and being thrown into a war zone. You just had to look after yourself. That’s how it was. Everyone was there for themselves. Fletcher was a great captain, he would pull you to the side and tell you how it is, but I never had that at Stoke. He could tell you himself how difficult it was at Stoke, compared to West Brom.”

Former Albion boss Tony Pulis was somebody that spent a lot of time defending Berahino during his spell in charge of the club. Around the training ground, though, he was a disciplinarian who would set high standards. Berahino had a lot of respect for the Welshman.

Saido Berahino  said “Tony Pulis was great. He was amazing towards me, because he knew what he wanted and if you didn’t follow his rules then you’re out of the team. He used to play these little mind games. For example if you were eating dinner, he’d come up and say ‘that’s my chair, get up’. You’d have to stand up and leave from where you were eating. He’d always make you feel that he was the boss and you were down here. That was his thing. I’d go into his office and he’d say ‘Saido, go and make me a cup of tea’, and then he’d say it’s too dark, or I want a different teabag, just these little mind games. Tactically, a fantastic manager. He knew how to set up a team to beat anyone. He was the one manager I saw who looked at the extra details for set-pieces. Our set-pieces were like penalties in the Premier League. I loved working with him. We had a great time.”

Berahino, still only 27, left Albion in January 2017 for Stoke City, but he faced struggles on the pitch and off of it in the Potteries and was released by after two and a half years. Since then, he has been in Belgium and is currently on loan from Zulte Waregem with Sporting Charleroi, where Albion defender Cedric Kipre is also currently on loan. The forward, who scored 20 goals for the club in the 2014-15 season before a proposed – and blocked – move to Tottenham the following summer heavily impacted his performances, still follows the club’s fortunes.