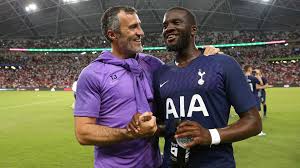 Tottenham midfielder Tanguy Ndombele has revealed that Kylian Mbappe has tried to persuade him to seal a move to Paris Saint-Germain. France international Ndombele left Lyon in 2019 to join Spurs, where he has established himself as a core member of Jose Mourinho’s squad following initial difficulties settling into English football. While the 24-year-old is happy in his current surroundings, he has admitted that he is open to a return to his homeland in the future. In fact, he has revealed that he has regularly held discussions with Mbappe, who is keen on uniting with his compatriot in the French capital.

“I’m a boy from the Paris region. Wearing the Paris jersey one day? Why not – but today I’m in Tottenham, and it’s going well,” he told Telefoot. I spoke with Kylian about a possible coming to PSG. Two or three years in a row we discussed it. It didn’t happen and today at Tottenham it’s going well, but why not in the future?”

The midfielder also spoke about his clashes with Jose Mourinho last season and has his eyes cast on this summer’s European Championships,

Tanguy Ndombele said: “At the beginning, it was going very well. After there were injuries, and we went to war. Well, not really war because he is the coach, I respect him. I have a strong character, and he may have a stronger one than me. Of course I miss the France Team. As a competitor, we want to be one of the best. The European Championship remains a goal in the back of my mind. If I do well at club level, why not be called up?”

#PL Stories- #StevenGerrard calls #Bielsaball a media narrative #LUFC
#PL Stories- #PepGuardiola makes private admission to Manchester City players over record form #MCFC
We use cookies on our website to give you the most relevant experience by remembering your preferences and repeat visits. By clicking “Accept”, you consent to the use of ALL the cookies.
Do not sell my personal information.
Cookie settingsACCEPT
Privacy & Cookies Policy