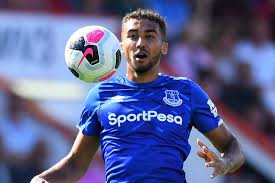 Dominic Calvert-Lewin believes Everton must continue to target and attract a high calibre of player like they did when signing James Rodriguez in the summer. The 29-year-old signed a two-year deal at Goodison Park during the summer transfer window, with the option of a third, bringing his six-year spell with Real Madrid to an end. The Colombia international has once again linked up with Carlo Ancelotti, who took him to Real in 2014 and signed him on a two-year loan for Bayern Munich back in 2017. And Calvert-Lewin has opened up on how he was relishing the chance to play with the attacker once he realised a deal was happening.

Dominic Calvert Lewin said “It’s only right that a club of Everton’s size, with where we want to go, attract that calibre of player, For me personally, I was just really excited because I was aware of what he was capable of. I’d seen the great goals he’d scored and the big teams he’d played for. He’s a top, top player and for me, as a centre-forward, I knew chance-creation would be there and it would be down to me to put the ball in the back of the net. It has been and I’m really enjoying playing with him. He’s a different level. He dictates games. He takes players out of games by taking touches. The way he manipulates the ball, he’s very hard to get it off – I don’t think I’ve seen him get tackled, even in training. Richy’s top. We’ve played with each other for a while now and we’ve got to learn each other’s game and personality, First and foremost, it’s his mentality – he’s a winner. He works so hard for the team. Some stuff that the naked eye can’t see as a spectator, but playing with him, the energy and work-rate that he gives you can’t be underestimated. And the quality he’s got going forward, he’s such a threat. For me to play alongside a player like that, it’s an absolute joy. We enjoy each other doing well – scoring, assisting. When he scores I’m equally as happy for him as he is for me when I score. I’ve got no doubt that he’s got a lot more to come, but the proof is in the pudding with the way you see him play at the moment – he’s got a bit of everything.”