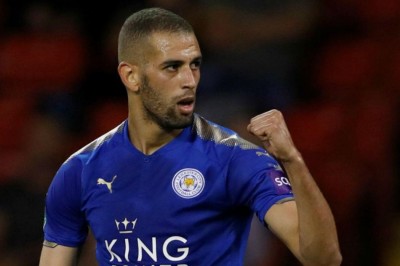 An injury to Jamie Vardy will give Islam Slimani a second chance to impress at Leicester City, according to former striker Emile Heskey.

Emile Heskey said “He’s got ability. When they first bought him I thought he was a perfect fit because he’s a forward who likes to chase lost causes and works really hard, and that’s what we like at Leicester.  We like people who are willing to put themselves about, who are going to put in the hard graft. But with the way Brendan has changed the philosophy and the way some of the players play, you need a little more than hard work at times. But he might have an opportunity now with Vardy being out and Iheanacho not necessarily grasping his chance with both hands. It’s definitely a chance for Slimani to get back into the good books.”

Slimani came on as a second-half substitute in the loss against Aston Villa on Sunday evening – his first appearance in a City shirt in over 1000 days. Loan spells at Newcastle United. Fenerbahce and Monaco have come and gone since the Algerian’s previous appearance before that cameo – starting the 2-0 FA Cup replay win over Fleetwood Town in January 2018. After failing to secure a summer move away from the King Power Stadium, Slimani has been drafted back into the first-team fold by manager Brendan Rodgers. Injury to talisman Jamie Vardy meant that Kelechi Iheanacho was selected to start the game vs Villa, with Slimani on the bench. And Heskey says that the absence of Vardy may give the 32-year-old more of a chance to impress Rodgers. Leicester are in Europa League action on Thursday when they host Ukrainian side Zorya Luhansk. However, Slimani has not been named in the Europa League squad, so will be unable to play in the game. That means that his next chance to impress will be in the Premier League encounter against Arsenal on Sunday.