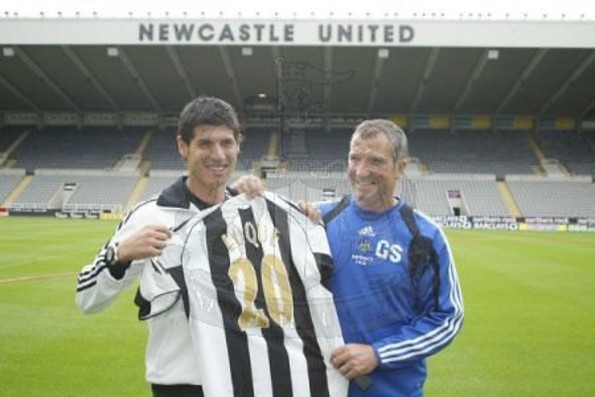 Albert Luque had another legacy in mind when he joined Newcastle United, but a chant celebrating his finest moment in a black-and-white shirt was still being sung long after his departure.

‘Albert Luque wrapped it up…’

Those five words take Luque back to a sunny bank holiday afternoon at the Stadium of Light on April 17, 2006 – and his first Wear-Tyne derby. After coming on for the injured Alan Shearer, whose retirement was effectively brought forward that day, Luque went on to score his first goal for the Magpies against Sunderland. Luque can still picture the scene in his mind: Shay Given’s punt forward, Charles N’Zogbia’s flick-on, the comical mix-up between Steven Caldwell and Danny Collins at the back… As commentator Kevin Keatings put it: ‘There’s a real chance to wrap it up now for Luque…’ Albert Luque , of course, did just that with a deft finish to send the already delirious away end into raptures as Newcastle came from a goal down to lead 4-1 against the relegated Black Cats. The relieved celebration perhaps said it all as Luque saluted the thousands of Newcastle fans behind the goal before blowing them a kiss and cupping his hands apologetically after a difficult first season on Tyneside.

Albert Luque  said “Given the rivalry between the two clubs, that moment will always stay with me. It was a goal that showed the fans the real me and I must say that I have been asked to do this interview so many times and I have not agreed to do it until now. I would like to address all the fans and apologise to them for not being able to give everything that was inside me as a footballer. Their treatment towards me was exquisite and I wish I could have paid them back with more goals. That is why I wanted to say sorry to all those supporters who have always been with me. I will forever be indebted to them. I remember that day perfectly. The stadium was packed and it was after that game that I realised that Newcastle fans are very special. They stuck with us throughout the game despite the defeat and, of all the clubs I have played for, Newcastle fans were the best. They supported the team from the first minute to the last and they were there for the less glamorous cup games during some difficult times and when we were away from home. Newcastle supporters are, without doubt, an example for others to follow – but I did have a hard time understanding Geordie. It’s very complicated!”

That strike at the Stadium of Light ultimately proved the only league goal Luque scored for Newcastle but, having been written off after two seasons at the club, it is easy to forget that the in-demand striker had a very different reputation when he completed a £9.5m move from Deportivo La Coruna in the summer of 2005. Luque was a fully-fledged Spain international, had scored goals in the latter stages of the Champions League and could play on the left-hand side and up front. As Graeme Souness put it, himself, Luque was ‘extremely talented’ with a ‘cannon of a left foot’ and the Newcastle manager vowed the new signing would get his ‘fair share of goals’. With Michael Owen following Luque through the door, Newcastle appeared to be adding some serious firepower to their ranks.

Luque made his debut just two days after joining from Deportivo and to put that whirlwind move into perspective, the new arrival even had a translator on the bench. While he had to get to grips with a new language, a new culture and a new style of football, Luque soon felt ‘very comfortable’ living in Jesmond. However, in just his second game for Newcastle, the Spaniard tore a hamstring and struggled to ever regain the form that saw the Magpies stump up such a sizeable sum.

Albert Luque said “The truth is that it was a huge blow because it was the most serious injury of my career. I was sidelined for two-and-a-half months in a new league with a different style of football and not having that run of games affected my performances in Newcastle. Graeme Souness was the person who bet on me, who signed me, and I will always owe him for not being able to give everything I had as a footballer. I remember my time in Newcastle very fondly but there is no doubt that they were my worst years in football. I had a number of different offers but I don’t have any regrets because I was totally convinced about moving to Newcastle. In the end, clearly, I did not choose the best option given how it worked out – but that was not the club’s fault.”

Luque would make just a handful of starts under Souness before the Scot was sacked midway through the campaign following a six-game winless streak in the Premier League. Glenn Roeder’s appointment sparked a turnaround in the Magpies’ fortunes as the black-and-whites qualified for Europe, but Luque was a peripheral figure. There were question marks surrounding Luque’s attitude and commitment – it had been noted how the No 7 walked out of St James’ Park after being left out of the squad against Watford by Roeder on one occasion – but the Spaniard insists it was ‘not true’ that he ‘did not care’ or that he ‘did not work hard for the team’. Although all of Luque’s three goals for the club came under Roeder, including a winner away to Palermo in the UEFA Cup, the 42-year-old believes his former manager was ‘the worst coach’ he had in his ‘entire career’.