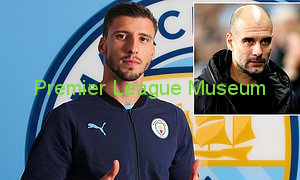 Pep Guardiola has indicated that Ruben Dias’s character was an important factor in Manchester City deciding to make him their new club record signing. The Blues paid £65.2m for the centre-back from Benfica, although they did get £13.7m for Nicolas Otamendi to go the other way. So impressed has Guardiola been that he expects Dias not only to become an important figure for City but also to soon become captain of his national team.

Pep Guardiola said “We knew all about his personality before we tried to buy him, He’s not just a player with skills, he’s a natural leader – you have to be to be captain of a team like Benfica, one of the greatest teams of all time in Europe, at 23. In a short time he’ll be captain of Portugal too. He needs time – to know the players, to know the way we want to play, but he came here for six years; in that time he will become an important player for us.”