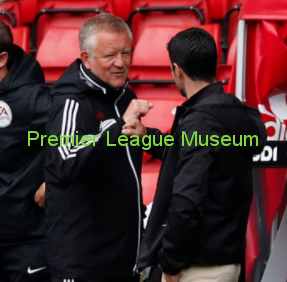 Mikel Arteta has lauded the revolutionary style of football Chris Wilder has implemented at Sheffield United ahead of their clash with Arsenal. The Blades head to the capital without a point from their opening three matches after narrow defeats to Wolves, Aston Villa and Leeds United. United took four points from Arsenal last season after beating them 1-0 at Bramall Lane and earning a 1-1 draw at the Emirates. Having surprised everyone with their debut Premier League campaign, Arteta was quick to praise Wilder for his unique tactical approach when asked about the United boss.

Mikel Arteta said “Incredible (the job he’s done), I start to analyse his team two years to understand some of the things he was doing and I think him and the coaching staff have done a really, really good job. Not just for the way they play because it is a very clear style, but for the culture they created around the club and this feeling that you can sense around the team and how they compete. I think it is remarkable what they have done. I was told by someone that we had to have a look at them, and I always like to see different trends, different ways of playing, formations, structures, patterns, and I was impressed with some of the things they were doing. It is always good to have this information. The margins between winning, drawing and losing are really small but they have generated big chances in every game and have been really unlucky in my opinion not to get anything out of those games. We have experience of playing them both in the Premier League and the cup and we know how difficult it is to play against them. The season they had, the way they have evolved the team since they’ve joined the Premier League has been unbelievable, what their manager has done with the coaching staff, with the resources they have, I think it’s remarkable. So we need to be really alert and have to play at our best again. I hope we can go on Sunday and grab three points because it’s going to be really important for us before the international break. The difference is, in both teams you will notice some changes in structure and players. It’s a different game but we know what they try to do and we know how difficult it will be. They have the necessity for points as well and that will make the team even more ready for that.”