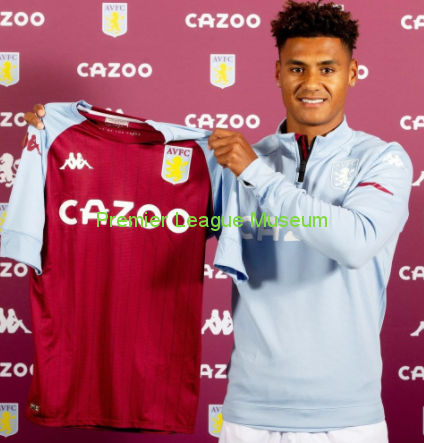 Dean Smith believes record-signing Ollie Watkins can become an iconic Aston Villa centre-forward, and said of his hefty price tag that it is something beyond the control of the player. He also revealed the details of the conversation he had with the player when he joined. Smith landed his No.1 transfer target last week and Watkins, 24, immediately showed what he’s all about after heading home in a behind-closed-doors friendly victory over Manchester United. Just two days later, the ex-Brentford ace was in the goals again and bagged the equaliser in the 3-1 win against Burton Albion, converting home from inside the six-yard box once more.

Dean Smith said “You are only worth what anybody is going to pay for you. I told him not to even worry about the price tag, You are only worth what anybody is going to pay for you. It’s an undisclosed price tag so I don’t know how everyone knows how much it is! He is a really sound lad. He is a great character, personality and someone I have worked with before. He scored against Manchester United in a friendly on Saturday and was disappointed it didn’t add to his goal tally. He will be pleased tonight he has got one tonight that goes in the record books. I have no doubts he will score goals for us this season and be a very much loved Aston Villa centre-forward. Even speaking to him he scored 26 goals last season and he believed he should have scored 36 as well which just shows he is not one who is going to rest on his laurels. He is a more mature, more confident player. He wants to get better, wants to improve. He knows how I like to play, he played centre-forward for me at Brentford. We spent an awful lot of money but, last season, we had to get 12-13 players in. It was a big change around for the football club. There’s another three or four weeks until the window does close. We’re happy with what we’ve done so far but we’re always trying to bring others in.”