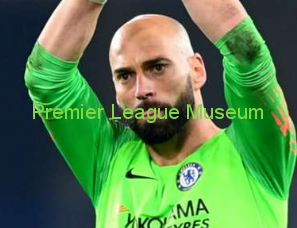 Willy Caballero has opened up his future at Chelsea after replacing Kep Arrizabalaga as Frank Lampard’s first-choice goalkeeper. The 38-year-old was brought into the Chelsea side for their crucial final Premier League game of the season against Wolves and kept his place in the FA Cup final and against Bayern Munich. With Arrizabalaga dropped for a second time this season, speculation is rife that Lampard will look to sell him this summer despite costing a club-record fee. But Caballero wants to stay at the club next season and have the first team goalkeeping status to himself.

Willy Caballero said “I’m contracted one more year at this club. I’m really happy to play in this t-shirt, I’d like to keep playing. I’ve become the first option, the first choice, and we’ll see what happens in the future. I’ll keep working hard to have this opportunity again. The boss said I had to play these couple of games. I’ve been in the second position as a goalkeeper, but I’ve always trained with the mentality of a first choice.”