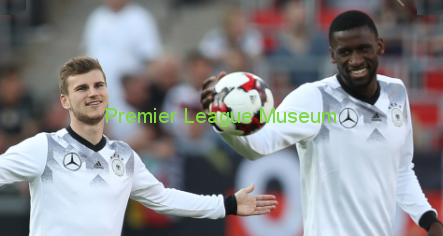 Antonio Rudiger insists that Chelsea signing Timo Werner was a ‘good sign’ that the Blues are heading in the right direction. Despite strong rumours of the 24-year-old going to Liverpool, Chelsea managed to get the youngster who has scored 28 Bundesliga goals in the 2019/20 campaign. Rudiger played a big part in convincing Werner that Chelsea was the right project for the 24-year-old, and the centre-back believes it proves the Blues are moving forward as a club.

Antonio Rudiger said “I think it is a good sign if you can get people like him in the club because he is also still young but he showed that he can score goals and I hope that he can do the same here than he did in Germany, I was one of the people who helped convince him to come here so it is also my job to help him. Of course, we speak the same language but he does speak very good English too. The thing is, with this job, and as a team, we all have to help him. We will do that for him, definitely. At the beginning, it was not easy for him because he was only 17 when he came in the squad and he was a little kid, very thin and everything, But now, over time, I think he went to the gym because he is bigger! Yes, each year, you see how good his statistics are. Every year he scored more than the last and his qualities are in scoring goals. I hope he can do that for us but the most important thing is that he stays healthy and he adapts to many different things.”