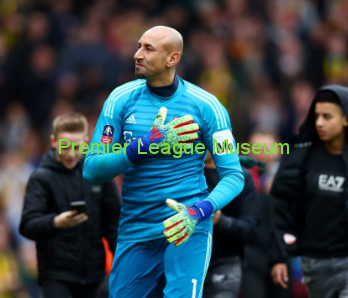 Heurelho Gomes is hoping he gets the chance to say a proper goodbye to the Watford supporters, with his time at the club coming to an end. The goalkeeper was due to depart last summer but was persuaded to stay for another year after helping the Hornets to the FA Cup final. This season was far less successful, however, ending in relegation after defeat at Arsenal yesterday and the Brazilian has issued a statement via Instagram saying the supporters and those who work for the club deserved better.

Heurelho Gomes said “It’s hurting and will hurts for a while! Not because of myself, maybe I’m the least affected, I knew one day it was going to come to an end for me, but I feel for the fans, I feel for my team mates and friends,I feel for the people at the training ground, I feel for the people at Stadium, I feel for everyone involved with Watford Football Club, you did deserve better from us. But It’s time to start to pick yourself up and go again, and go back to where you belong, and l’m sure that you gonna do it, I will be always supporting you, doesn’t matter where I go or what I’m doing. For now I would like to thank you so much for everything you have done to me, and you always will have a special place in my heart @watfordfcofficial hopefully I will have the opportunity to say goodbye.”