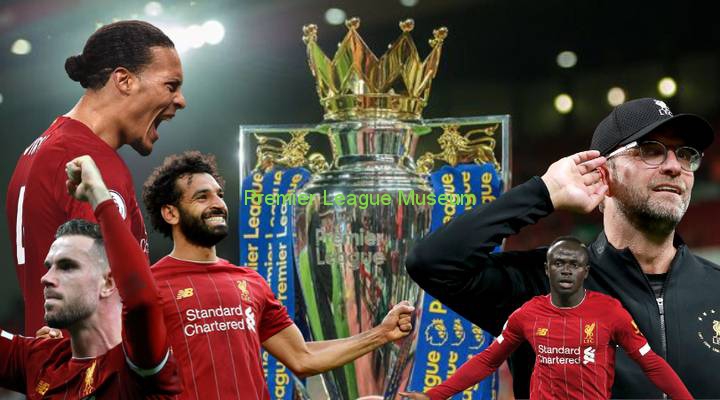 After 38 spine-tingling, adrenaline filled Match-weeks, the Premier League 2019-20 season came to a conclusion on July 26. The last match-week may not have been the title deciding week but contained fair share of excitement. The relegation battle went down to the wire. It also remained a nip and tuck as to who grabbed the remaining Champions League spots. From Liverpool clinching their first ever league title in 30 years to Corona Virus suspending Premier League football for almost three months, 2019/2020 season will be remembered and cherished for a long time.

Throughout the campaign, the audience were feasted to many tasty and eye-catching games and rivalries. Let’s have a look at some of the best games of the 2019-20 Premier League season.

The opening weekend of the season, the Premier League fans were treated to a heavy weight clash as Manchester United took on Chelsea. Frank Lampard began his managerial career with his first professional game against the most successful club of the Premier League era and Manchester United began their challenge to the top after signing £80 million defender Harry Maguire to repair the wobbly defence.

The score was 4-0, a bit harsh to the visitors who were the better team before the half time break. Ole Gunnar Solskjaer tweaked the set up setting his side for counter attacks and the tactical twist came to fruition sending the jubilant home fans into ecstasy. This was probably the start Red Devils supporters weren’t expecting after a difficult summer.

Premier League champions Manchester City started their title defence in style collecting impressive 5 goal, 4 goal victories against teams like West Ham United and Brighton and Hove Albion. The newly promoted Norwich were lining up to face City’s wrath and get battered in the process. However, shocking every fan, pundit and Premier League spectator on the planet, the Canaries walked away with a 3-2 win over Pep Guardiola’s champions, handing them their first defeat of the season.

Against all odds, the Citizens surrendered on numerous occasions to Noriwch throughout the game as Daniel Farke’s side capitalized on City’s defensive fratalities. Norwich went 2-0, a goal from Sergio Agureo did spring up a possible comeback but the much anticipated come-back never materialized as Teemu Pukki put the final nail into the coffin.

Another top six side vs new entrant clash that proved to be a cracker of game. The underdogs Villa secured a lead via John McGinn before Ainsley Maitland-Niles was sent off just before the stroke of half time adding more worries to already struggling Unai Emery’s side. Club record signing Nicolas Pepe did pull one back only to see Wesley give the lead for the second time to the Villians. Calum Chambers slotted his first Arsenal goal since 2016 to equalize and with no energy left in the Aston tank, Pierre-Emerick Aubameyang hit the sucker punch. A classic tie, with Arsenal come back twice from behind to ultimately walk away with all 3 points.

Brendan Rodgers’ Leicester City had a plucky upstart to their league campaign as the Foxes rode high on the table. The game against league leaders Liverpool was a stern test, especially with vociferous noises fermented in the red hot Anfield. The game was evenly contested throughout the 90 minutes as Leicester managed to survive every Liverpool sting.

After trailing for almost 40 minutes, James Maddison deservedly brought Foxes level. It looked like both the teams will share the spoils as Rodgers’s side countered every Liverpool attack but neither of the teams managed to gain the lead until Sadio Mane went down in the box to a Leicester challenge, arguably it was a soft touch but the penalty was awarded in 95th minute and James Miler, as cool as you like, converted from the spot to deliver the win to the Reds.

Leicester City ran riot at St. Mary’s in late October smashing 9 goals past the Southampton backline to register their biggest victory in English Top Flight football. That day, Foxes were ruthless and faultless, anything they touched inside the box went into the net.  Ayoze Perez and Jamie Vardy recorded a hat trick on the scoresheet, supported by goals of Ben Chilwell, Youri Tielemans and James Maddison. The mayhem against the Saints reiterated that Leicester aren’t in the mix for a top four finish by fluke but are here to break the top six myth and assert themselves as a new elite in the Premier League.

As for Southampton, their struggles were evident throughout the game and an early Ryan Bertrand red card just summed up the kind of a day they were having. Ralph Hasenhuttl came under tremendous pressure and was a favorite in the sack race but the club hierarchy stuck with Austrian and come to the end of the season, they’ll be glad where the Saints are.

It was a tough choice between the Sheffield-Manchester United game and the tie against Liverpool and Manchester City but the aforementioned game was the best game of November just for the sheer drama that unfolded over the course of 90 minutes.

The newly promoted Blades were on course to secure their first ever win against Manchester United since 1993 after a John Fleck effort and Lys Mousset fine strike had beaten David De Gea. For much part of the game, Ole Gunnar Solskjaer’s side failed to break Sheffield but as the clock struck the 70th minute, the infinite powers of Sir Alex Ferguson transmitted into the players on pitch as the Red Devils completed a complete turnaround in a space of 8 minutes, taking a 3-2 lead, thanks to Brandon Williams’ goal that sparked the fightback.

There was more drama to be unfolded as Sheffield United substitute Oli McBurnie had the last word, scoring an equalizer in the 90th minute.

Everton were in shambles lying in the relegation zone after an abysmal 5-2 Merseyside derby defeat. Marco Silva was sacked and assistant manager Duncun Ferguson took over the duties as caretaker manager. When so much has happened over the course of a week, players regrouping themselves mentally and emotionally, it is safe to predict that the next few games won’t be an easy ride.

Chelsea traveled to Goodison Park hoping to rub more salt on Everton’s burns but what happened over the next 90 minutes was truly a miracle. Under Ferguson, the tides turned and Everton didn’t look like a floundering side for the first time in the season as the Toffees secured a dominant 3-1 win over the Blues.

By December, it looked clear Manchester City weren’t in the driver’s seat to win the title, instead Liverpool were a threatening side, capitalizing on every City misfortune. An away trip to Molineux is never a rosy affair. A 10 men Manchester City blew away a 2-0 lead to lose a chaotic game against Nuno Espiritio Santo’s side. A twice re-taken Man City penalty, an Ederson red card, VAR drama, this game had everything that one would like in a classic Premier League dish. Adama Traore started the comeback followed by Raul Jimenez’s equalizer and ultimately a nicely timed Matt Doherty winner. The 3-2 win ensured that Wolves became the first side to complete a double over Manchester City in a Premier League season for the first time since Guardiola’s arrival in England.

A classic Burnley display as Sean Dyche’s pragmatic approach in front of the Old Trafford faithful secured the win over Manchester United. The Red Devils came into the tie after a 2-0 loss to fierce Liverpool but were still the favourites to win against the Clarets.

However, to everyone’s surprise Sean Dyche’s side managed to survive everything that United threw at them. The visitors doubled their advantage in the 56th minute and then came the characteristic Dyche approach. The team sat back, soaking all the pressure and retaining a solid shape throughout the game. The home side launched attack after attack, registering 24 shots on goal as compared to Burnley’s 6, yet the Clarets prevailed in the end.

The biggest headline coming into the match was not that Liverpool are the textbook favourites to win the league, it was they could do it without losing a game, emulating Arsenal’s 2003-04 invincible feat. The Reds supporters were optimistic, if any danger was there it was via teams such as Manchester City and Chelsea but not against a relegation battling Watford side.

Ismaila Sarr turned on the heat, single handedly quashing every Liverpool hope of winning the league unbeaten. No one saw that coming, Jurgen Klopp the least of all people. Hornets boss Nigel Pearson engineered an impossible victory as his tactics were spot on.

By this time Corona Virus was spreading like wildfire. Talk of suspending the league were already in place and the Manchester Derby was the second last game to be played in the month of March before the three month long hiatus.

The derby is always fierce with tempers flaring across the pitch. In the current scenario, Manchester City are far dominant than their neighbours. It’s almost like the roles of being the ‘elite side’ and ‘noisy neighbours’ have reversed. Ole Gunaar Solskjaer’s counter attacking tactics prevailed against City when the two sides last met in December.

Manchester United once again showed Manchester City their place as OGS mastered yet another 2-0 victory. It was closely contested affair as the Red Devils had only one goal cushion for 90 minutes as City pushed on. The Scott McTominay goal in the 96th minute sealed the victory giving the bragging rights to the United fans.

The much anticipated moment finally took place, Liverpool won the league on 26th June 2020 without playing a single minute on that day. Manchester City dropped points and that was all Liverpool needed to seal the title. Not that City were in contention to win the league but their loss to Chelsea ensured Liverpool’s title victory mathematically.

As for Chelsea, it was a massive win in their pursuit of a top four finish as they closed the gap on Leicester City.

The newly crowned champions were given guard of honor by the outgoing champions, a respectful gesture by Manchester City before the game.  But, the humbleness was only confined until the kick-off whistle. What came in the next 90 minutes was completely unexpected, Liverpool crumbled like statues of sand as Pep Guardiola’s side gave a message to the champions of England: ‘That they are coming for them next season’.

Guardiola completely outclassed Klopp’s men leaving the German manager to think over what challenge it is going to be to defend the crown. It was a typical Pep Guardiola style display that the fans in England have become accustomed to since the Spaniard’s arrival.

Bruno Fernandes controlled the pace of the game from United’s side as Solskjaer’s team came back from 1-0 down to lead 2-1. In the dying stages of the game, Manchester United threw all the hard work away as Saints equalized in the 96th minute via Michael Obafemi. The draw meant that the Red Devils were still 5th in the table trailing Foxes on goal difference.