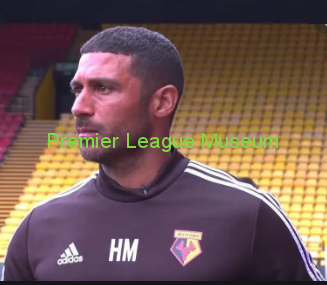 Intermin head coach Hayden Mullins has revealed that Watford has no fresh injury concerns ahead their all or nothing Premier League clash with Arsenal this weekend, but could be boosted by the return of Etienne Capoue. Capoue has been absent for the last two matches with an injury, but Hayden said there is a chance the midfielder could be available for the game.

Hayden Mullins said “The team news is we’re unchanged from the squad that played against Man City. No more fresh injury worries, Etienne is going to train tomorrow. He’s been having treatment, so we’ll have a look tomorrow and see if Etienne’s available for us. Etienne’s an important member of the squad, we know that. He’s got an injury at the moment, but we’ve also got different players who have different qualities and have stepped in and I think have done well. Etienne is an important member of the squad, as is everyone else. If we get him back fit for the game and he trains tomorrow, then it will be a boost to the squad. If not, then we’ve got other players who are more than capable. At times, yeah, when it’s the right time to shoot, definitely we need more shots, We need to be a bit of a threat to their goal, definitely. I don’t think we can be all out attack or gung-ho, I think we’ve got to try and be as balanced as we can. There could be a number of different things happening on Sunday and I’m sure one five minutes, the table will look different to another, so we need to try and stay focused on the pitch. The boys need to be sheltered in their messages from what we’re trying to get onto the pitch because they need to be focused in what they’re trying to do. What you’ve got to remember is after the game, Fozzy’s comments were what he felt at the time, The squad as a whole I’ve seen in the last two days, do not look like they’re lacking confidence. They’re a fantastic squad. After any defeat, it’s not easy, they’re professional players, they’re competitive, they want to win every game.”