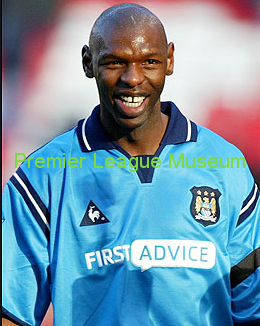 Manchester City legend Shaun Goater believes that his former club should consider buying a new striker to replace Sergio Aguero this summer, even if Gabriel Jesus is finally getting the freedom to show his potential. Goater explained how Jesus’ recent run in the side has shown the benefit of knowing his place is secure but still feels that the club needs one more striker to come into the club to replace Aguero.

Shaun Goater said “What’s happening now is what Jesus needed, He needed that time and space where he didn’t look over his shoulder and think ‘I’ve only got two games because I’m going to be brought off in the 70th minute in the second game because Sergio Aguero is going to go and play the rest of the games.’ He’s got the time knowing that it’s him that will play and as each game goes by, his form has started to come, he’s started to score goals. His ratio of scoring goals is not bad at all! And this is primarily playing second fiddle to what we will say is the best Premier League striker. The fact that his ratio is still very tidy, having this space to not look over his shoulder and think ‘I’ve got to score in this 90 minutes because I’m not sure I’ll play the next 90 minutes’, has relaxed him a little bit. I think with Sergio Aguero having one more season they need to be looking and to add to the squad. Whether that’s at some point next season, the early part of the season or the window at New Year. I think that’s an area City will have to strengthen. Having three strikers is great, but we know Sergio Aguero only has one more season. So whether they decide to continue with just Jesus and Aguero and look to bring in a striker around New Year knowing his time is the following season – I think they do need to find a striker.”