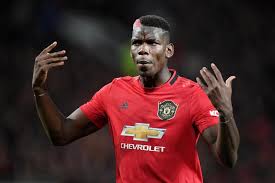 Paul Pogba has lifted the lid on the advice he gets from midfield partner Nemanja Matic during Manchester United games. A midfield trio of Pogba, Matic and Bruno Fernandes has emerged as Ole Gunnar Solskjaer’s preferred combination and has helped United win four successive games, as they prepare to face Southampton.

Pogba also lauded Mason Greenwood. The teenage forward has broken into the United team since the restart and showed some stunning form, scoring 15 senior goals for the campaign. And Pogba is certain that there is lots to come from Greenwood as long as he keeps his feet on the ground.

Paul Pogba said “Everybody knows about his talent but we’ve seen talented players here doing great at the start and then end up at other teams, We don’t want that. We want to protect him and how to protect him is, for me, just to say that he didn’t do anything yet. He knows it – I like to speak with him. I want to see him, with his quality and his talent, score above 15 goals a season and with the time we have left [this season], easy. He knows he has to work hard and that he’s not there yet.”