In February 2020, Manchester City were banned from European competitions more specifically Champions League (which was the competition they likely would have qualified) for two years and fined €30 million (£27m) for “serious breaches” of Uefa’s Financial Fair Play rules and for failing to cooperate with an investigation into them.

Manchester City have won their appeal to the Court of Arbitration for Sport (CAS) over alleged financial fair play violations and are free to play in the Champions League next season, it was announced on Monday

On Monday, the CAS statement said that charges related to concealment of equity funding “were clearly more significant violations than obstructing the CFCB’s investigations,” so it felt it was not appropriate to impose a ban on participating in UEFA’s club competitions. 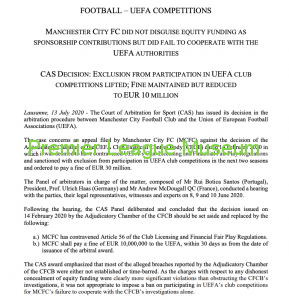