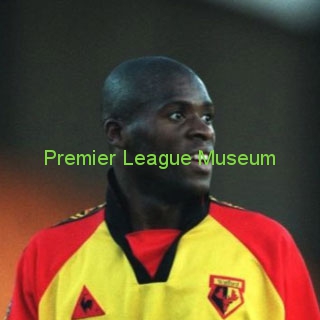 Michel Ngonge has revealed that in 1998 Graham Taylor signed him for Watford on video evidence, despite having never seen him play. Taylor had only watched two video cassettes of the player but nevertheless took a chance on the Belgium-born Congolese frontman because he was pleasantly surprised by his attitude during an interview and won over by his ruthless finishing and blistering pace on show on VHS. Ngonge played a crucial role in Watford’s championship campaign which eventually got them promoted to Premier League. He later joined Huddersfield on loan and came back to play for Queens Park Rangers later in his career as well.

Michel Ngonge said “I have a very precise memory from that transfer, My agent was Jacques Lichtenstein, who was also Ronny Rosenthal’s agent. Ronny shared a particular affinity with Belgium because he is married to a Belgian woman and had also played in Belgium. So it was Ronny Rosenthal and Jacques who mentioned my name to Taylor. And Taylor trusted Ronny blindly. Ronny brought not just me but also Alon Hazan, his Israeli teammate to the club. That said, in the summer of 1998 Watford were in the market for a quick and experienced striker to play in Championship. So Taylor invited me to Watford before the start of the new season and for two days we held talks with the club over a potential transfer. Then Taylor took the plunge on me despite the fact that he had never seen me play. He had only watched two video cassettes but he could sense my strong determination during our conversation and told me: ‘Ok, I will offer you a three-year contract’. For me that was exceptional. I think my performances and goals on the video cassettes must have helped but I think that just by talking to me, he felt I could do the job for him and was convinced I would be an interesting player for Watford. I think I did just that in my first season and repaid his faith by scoring some very important goals for Watford, most notably the Birmingham one. I have fond memories of Taylor, he was very human, our relationship was great. Taylor was a manager who talked to you to lift your spirits and give you tactical instructions,But on the pitch he was not ‘top’, it was his assistant Kenny Jackett who often called the shots in training. Kenny organised the sessions with the ball, the exercises with the shots on goal and games during training. Them two and Tom Walley were complementary. They had a great staff of 3-4 people and each one of them knew their roles. One day we went to White Hart Lane to watch Tottenham’s training sessions but I doubt it was Taylor’s idea. I believe it was Kenny who had organised it. That’s what makes a good manager: a leader who knows his strengths but also has the right people around him with other ideas. I often went over to Arsenal’s training ground to watch (Thierry) Henry and (Patrick) Vieira because they trained next to us and I realised that also there, it was not Arsène Wenger who was holding the training sessions but his assistant. It is rare to have a manage who does everything by himself. At Watford it was Kenny Jacket who organised the sessions but Taylor set us up tactically and worked with us on the tactical and psychological aspects.”