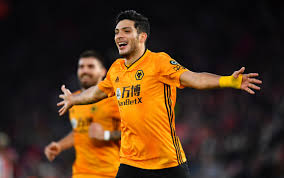 Wolves’ Mexican striker Raul Jimenez has admitted that he is “very happy” at the club despite some of Europe’s biggest clubs reportedly showing interest in the 29-year-old striker. Jimenez has been at the Midlands club for two years now and just last year converted his loan spell to a £33 million permanent transfer. His goal against Bournemouth in the previous match was his 15th of the season in the league with his overall tally standing at 24 in all competitions. The Mexican said that he was flattered by the interest from top clubs but insisted he is loving his time at Mollineux.

Raul Jimenez said “It feels very good [to be a Wolves player]. Two years here have been unbelievable, I think we made that connection since the beginning, since my transfer here. I’m very happy to be here. All of us have got better since the beginning. I’ve had two years now with a lot of progress. The coach knows how to guide the group. He’s given me the confidence to be an important man at the front of the attack. That’s what I’d been looking for since coming to Europe – it’s very important to me to have confidence from him and all my teammates.”