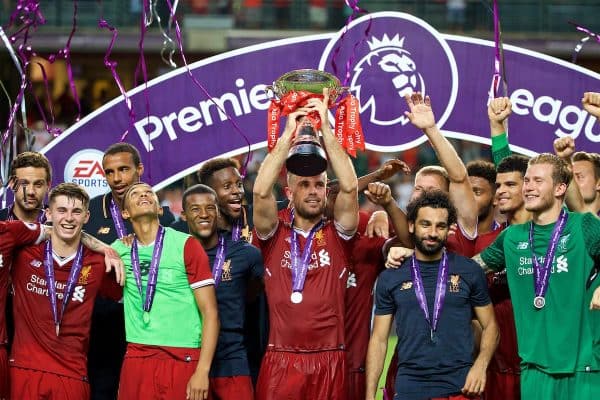 Liverpool have ended their 30-year wait for a premier league title is over. They are now officially Premier League 2019/2020 champions after Manchester City’s 2-1 loss at Chelsea on Thursday.

Jurgen Klopp was very emotional and could not hide them as he spoke to Sky Sports in an interview after the Chelsea win.

Jurgen Klopp said “I have no words. It’s unbelievable. It’s much more than I ever thought, to become champions with this outstanding club is unbelievable.”

The long wait has set off celebrations all throughout the football-mad city.

Among those marking the achievement was former skipper Gerrard, who won two FA Cups and a Champions League with the club but never claimed a league title.

Steven Gerrard said “Congratulations to all liverpoolfc on winning the premier league. Incredible achievement from a fantastic squad of top players. Lead by a world class manager and coaching team also a special mention for the backing from FSG. And lastly and most importantly the fans who have waited 30 years. Let the party begin.”

Chelsea boss Frank Lampard who masterminding 2-1 win over City that handed the Reds their first league title in 30 years admitted that Liverpool and Manchester City have set the benchmark for the rest of the Premier League to follow, Lampard, who won three Premier League titles as a player at Chelsea, congratulated Liverpool in a news conference and said it was up to other clubs to match Liverpool and Pep Guardiola’s City.

Frank Lampard said “I think for the last three seasons, themselves (Liverpool) and City have been out on their own pretty much, and that’s a lot of work. It’s a gap that we want to try and breach, we want to move up towards – they are two of the best teams in the world. Again, credit to Liverpool for what they’ve done”.

Pep Guardiola who led Manchester City to back to back titles believes Liverpool’s “incredible focus” on ending their 30-year title drought was the decisive factor in Jürgen Klopp’s side ending Manchester City’s reign as champions. Guardiola congratulated Liverpool on their title but admitted his side have lacked consistency over the course of the season.

Although Liverpool have won the title with seven games to spare ( a record in itself), the reds will have to wait to get their hands on the maiden premier league trophy.  The Reds will be able to lift the Premier League trophy at their final home game of the season. The date is currently set at July 18, when the Klopp’s side host Chelsea at Anfield.

#PremierLeagueStories – Aston Villa manager #DeanSmith thinks Brighton could still be dragged into a relegation fight #BHAFC #AVFC
#PremierLeagueStories – Crystal Palace defender #JoelWard highlights why Liverpool are such a difficult team to play against #LFC #CPFC
We use cookies on our website to give you the most relevant experience by remembering your preferences and repeat visits. By clicking “Accept”, you consent to the use of ALL the cookies.
Do not sell my personal information.
Cookie settingsACCEPT
Privacy & Cookies Policy