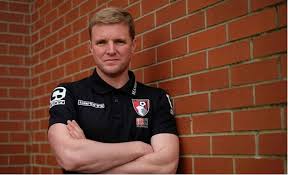 Former Burnley manager Eddie Howe praised the response of the club and captain Ben Mee over the offensive banner flown over the Etihad Stadium on Monday night. A plane flew above the ground trailing the words ‘White lives matter Burnley’ just after kick-off between Manchester City and the Clarets, moments, after all the players had taken a knee in support of the Black, Lives Matter movement. Burnley issued a strong statement condemning the banner during half-time, and Mee spoke passionately about the incident after the match.