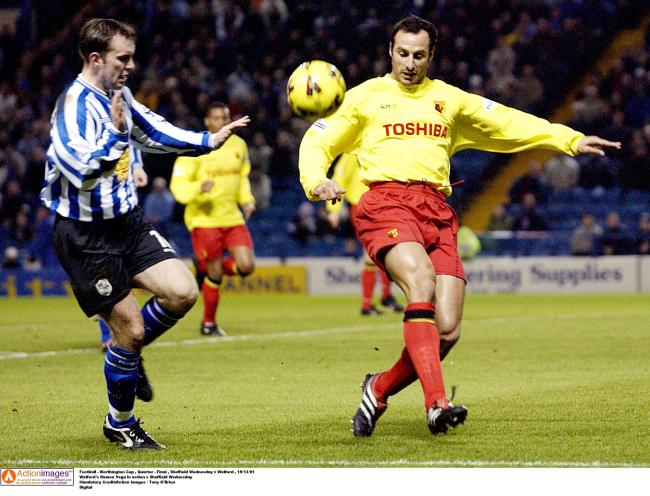 Ramon Vega has delved into Watford’s inability to click into gear under manager Gianluca Vialli throughout the 2001-2002 campaign, claiming that their failure to gain promotion was rooted in the players’ difficulties to embrace the Italian’s tactical innovation while jealousy between certain teammates did the rest. Watford’s Premier League ambitions swiftly turned into an uphill battle to even stay in the division and Vega pins the blame on “too many new things” as the club brought in 14 new players that summer in an attempt to break with the past. Besides Vialli, who had won six trophies as a player-manager with Chelsea, also had a new backroom team in place as the Hornets ushered in a new era on and off the pitch.

Ramon Vega said “I think that Gianluca was too far ahead of what the team was, In the team we had experienced players like Filippo Galli, Allan Nielsen, myself…we had good experienced players but that is not enough because it was more about having all these players connected together, and that wasn’t the case, which was the main issue that season. All thing considered, the club had a new manager, new staff and too many new players, another big hurdle to adjust to. It was just too many new things in one go and that potentially was the biggest problem we had. It would have been more simple to add one player at the time. When Gianluca was at Chelsea he was not just a player but also a manager, then suddenly at Watford he was the manager. First of all, it was strange to have such a young manager at Watford, but you could see, he had ambitions. He had the so-called ‘Italian way’ which I knew extremely well from my time at Cagliari, such as preparation before the game, Italian staff, nutrition, preparatori Italiani, tiny camps, everything was structured and done the Italian way and super new for a club like Watford at the time. He brought with him a completely new way of thinking, where you had to look after your body, be careful what you ate, all of that, the tactics, the strategies, the tactical awareness on the pitch. Everything was new. The problem? Most of our players had never even played in the Premier League and found it difficult to adjust to a new way of thinking and playing. It would always take time to (learn) to play into that system and that was the biggest challenge Vialli had, for the players to buy into his style of play and his way of seeing football.”

But that wasn’t the only obstacle the former Chelsea manager had to overcome at Vicarage Road as the Hornets ended the season in 14th position. Throughout the campaign, it quickly dawned on Vega that Watford had no sense of togetherness and was anything but a ‘united squad’, but rather a collection of individuals where everybody ‘thought selfishly’.

Ramon Vega said “We weren’t really a team. Everybody thought about what was best for himself individually, not for the team, selfish attitudes, Some of the Watford players had never previously played in the Premier League, and for them playing with us was ‘something’. Those players were envious that we older players earned more than them. Honestly, I have never seen anything like that, in the Premier League you don’t have it to such an extent. It’s a shame because even in the Premier League you have players who earn less than others but even there I never witnessed something like at Watford. I repeat, there was a great amount of jealousy and envy and the squad was not united. When things like that happen and someone looks at you thinking, ‘he earns more’ instead of concentrating on football, then you waste mental energies.”

#PremierLeagueStories – #DarrenBent asks #DeclanRice to Stay at West Ham despite interest from bigger clubs #WHUFC
#PremierLeagueStories – Southampton boss #RalphHasenhuttl says #PierreEmileHojbjerg will lose captain’s Armband if he doesn’t sign contract extension #SaintsFC #Captain
We use cookies on our website to give you the most relevant experience by remembering your preferences and repeat visits. By clicking “Accept”, you consent to the use of ALL the cookies.
Do not sell my personal information.
Cookie settingsACCEPT
Privacy & Cookies Policy