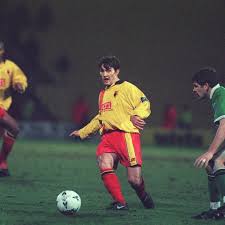 Richard Johnson believes that it is a tall order for any top-flight club, not just Watford, to hand homegrown players from the academy a chance to play in the Premier League due to what is at stake in financial and sporting terms. The Hornets have been reluctant to promote youngsters in recent years with most of the under 21’s talents merely getting a look-in in the early rounds of the FA Cup before they decide to move to pastures new in search of first-team football, often in the lower leagues. Tommie Hoban in the 2013-2014 season remains Watford’s last academy product to have broken into the first-team with any regularity, after the Irish defender made 34 league appearances for the Hornets over two seasons. But Johnson thinks that the regression of the competitiveness of the youth leagues makes it inevitable for chairman Gino Pozzo to spend lavishly on ‘the finished article’. The former Watford man also highlights the pressure clubs in the country’s top division are placed under, with most managers having no choice but to select a full-strength line-up in the Premier League.

Richard Johnson said “Look, I think nowadays that could be said for a lot of clubs, not just Watford. It’s been easier for quite a few clubs over the years that didn’t have a big budget for the academies to look abroad. For a club like Watford, whose financial status depends on staying in the Premier League it’s hard to produce young players now that are capable of stepping up to that level. Obviously there is an under 18’s, under 19’s and the under 23’s youth leagues that aren’t as strong as years ago and as a result it’s difficult to get those players playing at a competitive level and prepare them for the first team. If you look at the Chelseas, Man Uniteds, Arsenals, the good players that come into their squads are out on loan at League 1 or League 2 clubs to sort of learn the trade and physically prepare them. It’s difficult to find that sort of balance and get players out of those youth teams but Watford isn’t alone in that respect and it’s a lot harder especially because of the financial demands and the results-driven business that we are in to get players from the academy and give them first-team experience.”

In recent times, the most famous case of a budding player coming through the ranks at Watford is now England superstar Jadon Sancho, who was snapped up by Manchester City in 2015 at the tender age of 14. But Johnson defends Watford’s decision to part ways with the starlet five years ago, underlining that every club has once let a prodigious talent slip through their fingers when an unknown teenager.

Richard Johnson  said “I wasn’t at the club then so I don’t know the history and for whatever reason I can’t comment on the decision that was made on Jadon Sancho in 2015. But didn’t Arsenal let Harry Kane go when he was a young kid? Wasn’t Declan Rice at Chelsea? Football is only about opinion at the end of the day and it’s hard (to predict if they are gonna make it) when they are young.”

Reports have surfaced in recent months about Gerard Deulofeu and Ismaila Sarr being linked with transfers to other clubs, but Johnson urged the pair to rebuff any approaches and pledge their future to Watford.

Richard Johnson  said  “Watford has given Gerard and Ismaila a chance to play in the Premier League,” he said. “Deulofeu has been at some of the biggest clubs in the world like Barcelona but he wanted to play and do that in the Premier League. Watford gave him that chance and I think he still has a big part to play here at Watford, although I don’t know what is going on behind the scenes but Gerard seems happy enough at Watford. “He’s a major part in the way we play, he has that X-Factor and can turn the game quickly, so I wouldn’t want to see him leave. As for Sarr, who is the club’s record signing, he hasn’t consistently done it for long enough to think about leaving although he has had some good performances of late. There’s no better club than Watford for me to look after him and give him the opportunity. Two seasons down the line a move (to a bigger club) can happen for me but under one condition: that he keeps up that level of performance he showed in the last games.”

#premierleaguestories – “That season” when young vibrant #DavidMoyes took Everton #BlueFamily to #ChampionsLeague
#premierleaguestories- #SteveBruce explains what makes #AllanSaint-Maximin so special?
We use cookies on our website to give you the most relevant experience by remembering your preferences and repeat visits. By clicking “Accept”, you consent to the use of ALL the cookies.
Do not sell my personal information.
Cookie settingsACCEPT
Privacy & Cookies Policy