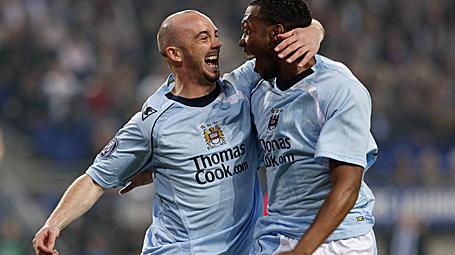 Almost 12 years have passed since Manchester City suffered a humiliating 8-1 defeat at home to Middlesbrough. There’s no better result to illustrate how the club has transformed since then, with Sven Goran-Eriksson leaving his post as City manager that day and Sheikh Mansour’s takeover going through a short time later. City still managed to sneak into the following season’s UEFA Cup via the fair play league. But what happened to that side? Here’s how their careers played out after that fateful day.

Sweden’s number one for over a decade, Andreas Isaksson suffered the indignity of conceding eight goals in his final appearance between the sticks for City, having fallen behind Joe Hart in the pecking order. But it was far from a goalkeeping horror show, and Boro might have hit double figures were it not for some decent saves from Isaksson. That summer he left for PSV, where he’d win the KNVB Cup in 2012, before four seasons and over 100 appearances for Turkish side Kasımpaşa. He retired in 2018, having seen out his twilight years with Djurgårdens IF in Sweden.

China’s greatest-ever export to European football, Sun Jihai’s career didn’t get the ending it deserved with a disastrous display in City’s defence – admittedly not helped by Richard Dunne’s early dismissal. This was the last of the tough-tackling defender’s 151 appearances for City, with a short and unsuccessful stint at Championship side Sheffield United the following season. He returned to his homeland a year later, signing for Chengdu Blades, eventually retiring in 2016. Post-retirement he’s a successful entrepreneur in China.

The humbling defeat wasn’t quite Corluka’s final match in a City shirt, but his days were numbered. A deadline day signing at a reported fee of £8.5m for Tottenham Hotspur that summer, he joined his Croatian compatriot Luka Modric and would go on to be one of the key men in Harry Redknapp’s side as they pipped City to Champions League qualification in 2010. He’s been turning out for Lokomotiv Moscow since 2012, winning one Russian title and three domestic cups. He retired from international duty after finishing as a runner-up in the 2018 World Cup.

The former Republic of Ireland international received one of his eight Premier League red cards just 15 minutes into this disastrous afternoon – making him the joint most-dismissed player since its inception in 1992. Richard Dunne takes no nonsense from Louis Saha He remained as a first-choice starter the following season and left for Aston Villa in 2009, after nine years and over 350 appearances for City. He helped QPR get promoted in 2014 but retired the following season after their relegation.

A regular for City that season, he became more of a peripheral figure the following campaign and was released at the end of his contract in 2009. He’d subsequently spend two years without a club before linking back up with Eriksson at Leicester, but he’d only appear for the Foxes in the League Cup and retired after just half a season. They were things that I’ve never witnessed before, but it was all part of the madness at the time,” he recently reminisced on Planet Football’s Broken Metatarsal podcast. When you’re winning it’s good, but when it started to go a bit pear-shaped it was difficult.”

“Not as bad as Chelsea earlier in the season but was glad when the game was over”, was the verdict in the MEN’s player ratings as he was one of two players scored just three out of 10. The Spaniard went on to spend two more years with City, and subsequently had stints at Lazio, Norwich City, Las Palmas and AEK Larnaca. Now 35, he’s still playing for Spanish third-tier side Real Unión.

The academy graduate went on to enjoy the best individual campaign of his career the following season, scoring nine Premier League goals – nearly half of his career total. There were many better days than this for Ireland. Later pushed to the periphery by Roberto Mancini, he signed for Aston Villa in 2010. He remained in the Premier League, although increasingly beset by injuries, until 2018 when he was released by Stoke. Now 33, he’s not played professionally since then, having spent a short two-month spell without featuring at Bolton Wanderers.

Martin Petrov remained at City until 2010, when he was released alongside Benjani Mwaruwari, Karl Moore and Sylvinho as the newly-minted club made further strides to overhaul the squad. Time with Bolton Wanderers and Espanyol would follow, and even a short spell with local amateur side Chorlton Torpedo, before calling time on his career back in Bulgaria with CSKA Sofia.

A favourite of Eriksson’s, Gelson Fernandes remained at City after the Swede departed but would be given far fewer opportunities under successor Hughes before being shown the door in 2009. A nomadic career across Europe would follow – like Ball, he’d briefly rejoin Eriksson with Leicester in 2011 – before settling with Eintracht Frankfurt as a veteran. He won the DFB Pokal with the club in 2018, but was suspended for their win over Bayern Munich in the final.

Leaving City at the end of his contract in 2009, Darius Vassell joined Turkish underdogs Ankaragücü and looked shell-shocked after being greeted by thousands of fervent fans upon his arrival. Vassell couldn’t find the mark He only spent a year with the Super Lig club, and would see out his final years in the Championship with Leicester. One of three players from this XI that would reunite with Eriksson.

Spared the mauling that was to follow, Benjani was withdrawn following Dunne’s red card as the match was still scoreless. Whilst at City, the former Zimbabwe striker never matched his Portsmouth form. He remained until 2010 and left having scored just four Premier League goals in three years, although one of which was a memorable match-winner in a Manchester derby on his debut. The final years of his career saw him go from Blackburn Rovers back to Portsmouth, and finally to South African sides Chippa United and Bidvest Wits.

#premierleaguestories – #StuartArmstrong feels comfortable at Southampton #SaintsFC after rough start
#premierleaguestories – #JohnStones admits getting a break due to #CoronaVirus will help him train to be better for Manchester City #MCFC
We use cookies on our website to give you the most relevant experience by remembering your preferences and repeat visits. By clicking “Accept”, you consent to the use of ALL the cookies.
Do not sell my personal information.
Cookie settingsACCEPT
Privacy & Cookies Policy