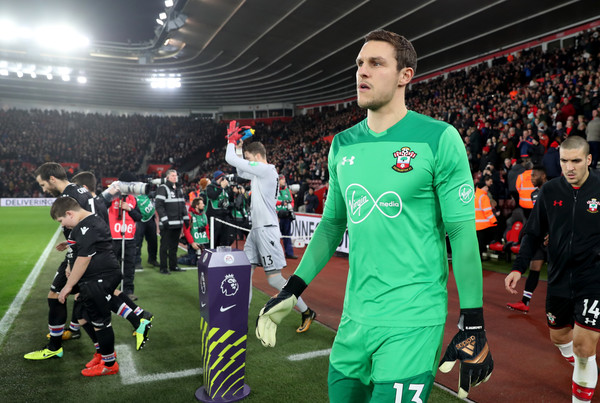 Alex McCarthy said “THE withdrawal symptoms from football have led me to re-visit some classic matches this week – which I’m sure many of you are doing too! Watching the old games back got me thinking about my favourite kit, away ground, time of the season etc. So, I’ve decided to do a ‘my favourite’ edition for today’s piece. Hopefully there will be some memories in there that you can all relate to.”

FAVOURITE AWAY GROUND: STAMFORD BRIDGE There was a few in this category that stood out, but I’ve gone with Stamford Bridge. There’s something about the stadium when you first step out that makes it special. Also, add into the mix that we’ve picked up a few decent results there in the last few seasons! It’s an extremely tough place to go, but it’s an away day that I always look forward to.

FAVOURITE GAME THAT I’VE PLAYED IN: SWANSEA 0-1 SOUTHAMPTON, MAY 2018 This one was tricky, as there’s a fair few to choose from but I’ve gone with that night in Swansea back in May 2018. The pressure building up to the game was crazy, whoever lost was effectively relegated to the Championship. The team was so determined to get the win that night, and I’ve never experienced relief like it when the full-time whistle went, it was just a massive party and celebration with the Saints fans in the away end. A night I’ll never forget.

FAVOURITE SAVE MADE: SWANSEA 0-1 SOUTHAMPTON, ANDRE AYEW It’s that night again! I remember this save so clearly. It was right at the start of the second half, the game was still goalless and the ball came to Ayew just outside the box on the left-hand side. Ayew curled this brilliant shot towards the top right-hand corner of the goal and I just managed to tip the ball over the bar. The timing of the first goal that evening was so crucial, and if that had gone in, you don’t want to think about what would’ve happened.

FAVOURITE KIT: 2016/17 GOALKEEPER KIT, PURPLE No surprises that I’ve gone with a goalkeeper’s kit for this one but this was the first kit I had when I joined Saints back in the summer of 2016. It was also the first season that the club had switched over to Under Armour and it still is my favourite kit to this very day. It was predominantly purple, with a red stripe on each sleeve – it was the start of a new era for me too, personally, which always brings back good memories.

FAVOURITE BOOTS: ADIDAS PREDATORS, MUTATORS – 2020 These are the current ones that I have now and they’re the most comfortable pair of football boots I’ve ever owned. They’re black and red, with the best part about them being they have this special rubber material on the front of the boot which helps with your control and when you go to pass/strike the ball. I’ve worn Adidas Predators for a few years now and they seem to keep on getting better, with these being firmly at the top of my list.

FAVOURITE TIME OF THE SEASON: CHRISTMAS Some players love it, whilst others find it a bit of a shock to the system. I personally love the festive period of the season – you just have game after game, and it’s a fantastic opportunity to collect a bucket load of points and push yourself up the table. Just take this season for example, we accumulated 10 points from a possible 12 over the busy period – it really did turn the season round for us. It can be tough mentally and physically, but it’s all I’ve ever known growing up and the fans absolutely love it.

FAVOURITE PLAYER GROWING UP: PETER SCHMEICHEL I think if you asked any aspiring goalkeeper who grew up in the 1990s, then Peter Schmeichel would be their answer too! He was a true great, in what was possibly one of the greatest teams in the Premier League era. I remember as a kid trying to emulate many of his saves in my back garden or down the park on a Saturday morning when training with my youth team. He was simply one of the best of all time.

I hope you Saints fans reading this agree with my favourite save and game, as I know that night was as special for you guys as it was for me and the team!

Have a great weekend guys and I’ll be back next week with my next instalment.