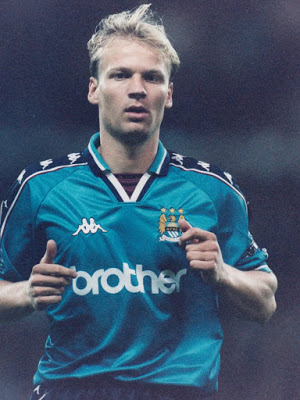 Gerard Wiekens has opened up on his rollercoaster Manchester City career which featured two relegations and three promotions in his time at the club.

Gerard Wiekens  said “I spent seven years at the club and when I came over it was a big club but when you look now it’s nice to be a part of the history of one of the biggest clubs in the world now. I had seven great years, the first five I played a lot and then I didn’t play that many games but football-wise England is the best and nicest league to play football in. Also to live in England and Manchester, I went over with my wife, my two sons were born in Stockport and we really had a wonderful time there. If I have time to go back and see the club playing it is still wonderful. My sons are City-mad and they watch all of the games. We try to go back as often as we can to see some games and the fact that people still remember us I really do appreciate. It’s a great feeling. I don’t want to say it was the worst team City ever had because we played at the lowest point but with Dickov, Goater, Weaver and all the other lads, and the chairman and the coach, it was a team that had a lot of pride and played with that and cared about the club -, and that’s why the fans still appreciate it.”

The Dutch defender, who joined the club in 1997, spoke about the chaos at the club on his arrival, the frustrations of the fans, and an eventual return to the top flight.  Wiekens would be the Blues player of the year in 1998/99 as the club battled their way back from demotion to the third tier, culminating in the unforgettable Wembley win over Gillingham.

#premierleaguestories – #DimitarBerbatov names Manchester United #MUFC #NemanjaVidic as the toughest opponent he faced
@Premierleaguestories – Tottenham #THFC #HarryWinks advises @premierleague players to take care of their mental health
We use cookies on our website to give you the most relevant experience by remembering your preferences and repeat visits. By clicking “Accept”, you consent to the use of ALL the cookies.
Do not sell my personal information.
Cookie settingsACCEPT
Privacy & Cookies Policy