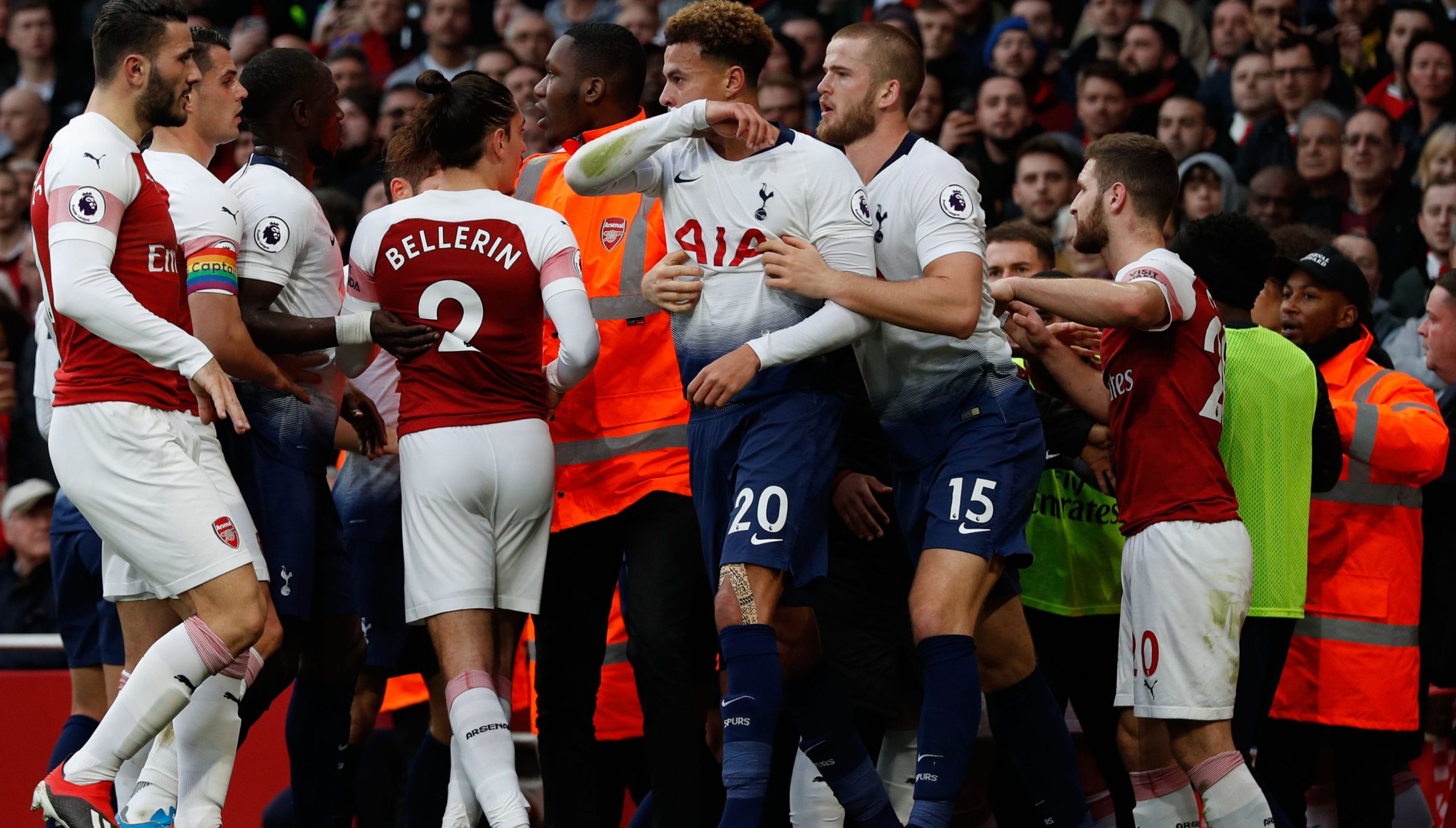 Thierry Henry, Harry Kane, Dennis Bergkamp and Teddy Sheringham are all names who have played key roles when it comes to settling one of football’s most intense rivalries.  However, there are more peripheral figures in the team who have made their mark in the North London Derby as well.

The first season of the Premier League saw Arsenal and Spurs finish 10th and 8th respectively, with Tottenham leapfrogging their rivals on the final day of the season with a 3-1 win at Highbury.  A gruelling campaign for both – as well as Arsenal’s FA Cup final commitments days later – saw both effectively field weakened sides but the visitors still played Teddy Sherigham who opened the scoring as he claimed the Golden Boot for the season. Spurs’ second goal came when Hendry, playing just his fifth match of the campaign, poked home in front of the North Bank before adding his second and Spurs’ third after Paul Dickov had scored for Arsenal.  Hendry’s only significant contribution in white would see Spurs complete their only Premier League double to date over Arsenal and sealing their last away win until 2010.

Arsenal were on a seven match winning run and closing in on the title in 2002 when Spurs arrived at Highbury looking to at least put a dent in their chances.  Freddie Ljungberg would give Arsenal the lead but with just nine minutes to play, Sheringham would score from the spot to level the scores.  Five minutes later, Thierry Henry was fouled by Dean Richards and despite all the attacking talent on the pitch, the responsibility would be handed to the Gunners’ Cameroon full back. Despite scoring in an Olympic victory for his country two years earlier, Lauren hadn’t ever taken a Premier League penalty. Any worries were put to bed as the defender casually rolled the ball down the middle of the goal after Kasey Keller had committed to diving left.

In an Arsenal career lacking many personal highlights, Bentdner can at least proudly say he has a winning goal in a north London derby.  Another tight encounter saw the two sides level in this 2007/08 battle. Emmanuel Adebayor had put Arsenal in front just after half time but Dimitar Berbatov drew the sides level before Manuel Almunia saved a Robbie Keane penalty.  In the 75th minute, as Arsenal were preparing to take a corner, Arsene Wenger withdrew Emmanuel Eboue for the big Dane who strode onto the pitch to immediately leap highest to reach Cesc Febragas’ cross to power the ball beyond Paul Robinson for victory.

Rose would make his unforgettable Spurs debut in 2010, scoring a thunderbolt of a volley from 25 yards to put Spurs 1-0 up against the Gunners at a rapturous While Hart Lane.  Gareth Bale would add a second and Arsenal would pull one back but Spurs would hang on for the win – a first over their rivals for over a decade – and the headlines would belong to the 19-year-old.

After failing to beat Arsenal away for over 15 years with that John Hendry brace, Spurs could finally celebrate a win at the home of their rivals in the autumn of 2010. Arsenal had actually raced into a 2-0 first half lead before Bale pulled one back after the break and Rafael van der Vaart would level from the spot. With just five minutes to play, Kaboul would get his head onto van der Vaart’s free kick to flick the ball beyond Almunia and seal victory in the most dramatic and unexpected of circumstances. Younes Kaboul celebrates his winner against Arsenal (Image: IAN KINGTON/AFP via Getty Images)

Following a series of loans, Kyle Walker would finally establish himself in the Tottenham first team in 2011 and wasted no time endearing himself to the White Hart Lane faithful.  With the north London rivals deadlocked at 1-1 with just under 20 minutes to play, an on-rushing Walker would chase down a loose ball from a blocked Luka Modric shot. After winning the ball in midfield with his first touch, the full-back unexpectedly hit a furious low drive that Wojciech Szczesny would fail to keep out as Spurs would beat the Gunners 2-1.

Tottenham travelled to the Emirates in February 2012 looking to open up a 13-point gap ahead of Arsenal in the table and wasted no time asserting their superiority racing into a 2-0 lead after just 34 minutes. The Gunners would memorably fight back to destroy Spurs in an emphatic 5-2 victory with a blistering attacking display that effectively left their rivals shell-shocked for weeks as they surrendered the advantage in the league.  Sparking the recovery on the day was right back Bacary Sagna, charging up the field to plant his head on a Mikel Arteta cross to reduce the deficit. The Frenchman refused to celebrate, immediately running into the goal to grab the ball for the restart.  Robin van Persie, Tomas Rosicky and two goals from Theo Walcott would complete the comeback in some style.

Staring down the barrel of a rare home defeat to their north London rivals following Harry Kane’s first half opener in November 2015, Wenger would have Gibbs to thank for salvaging a point on the day. Having only been introduced as a substitute two minutes earlier, the left-back would make a surging run forward to get on the end of Mesut Ozil’s deep in-swinging cross to bundle the ball beyond Hugo Lloris with little over ten minutes remaining – much to the relief of most inside the Emirates