#PLHistory #premierleaguestories #PL #Premierleague – Everyone knows how #FergieTime was born but do you know why ? 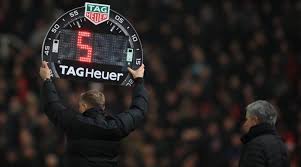 English Premier League is considered world’s most exciting league for many reasons which include unpredictability, competition both at top/bottom ends and its frantic tempo.

There’s one other crucial factor in English premier league’s reputation as an entertaining, thrilling and crazy spectacle which is injury time and late goals. None of the other major European leagues comes close to England’s top-flight for late drama.

Unfortunately until Sir Alex Ferguson’s retirement, this injury time and late goals had become synonymous with the manager of most successful team only as people thought they were the ones getting most benefit and got termed as “Fergie Time”.

But the real story of how injury time aka “Fergie time”  started in English Premier League is unknown and this blog will tell it to you today.

Story that we know…

The first time when injury time got most attention was a memorable match with a dramatic finish on Saturday, April 10, 1993. In a key end of season match, Manchester United trailed Sheffield Wednesday 0–1 in the second half of a ‘must win’ match. Although a Steve Bruce header in front of the Stretford End made it 1–1 it looked like the game was heading for a draw. In retrospect United didn’t need the points (winning the league by ten after an extraordinary Villa collapse), but at the time the race with Villa was very close and defeat (or even a draw) would have handed the initiative to United’s former boss Ron Atkinson and his Aston Villa team. And so ‘Fergie Time’ was born – or as the rest of us know it, ‘shall we just play on until United win time’ – as another Bruce header (in the 7th minute of injury time) eased nerves at a league title starved Man U, leading to wild celebrations.

Story that we don’t know…

When inaugural premier league season started in August 1992, there was no board to tell you how long was left i.e. added on time was an entirely unknown quantity and the supporters of the team in the lead would be baying for the whistle from the end of 90 minutes without heed of injury or time-wasting. Since spectators, TV audience, players and significantly the manager’s at touchline had no idea what was in referee’s watch, they could thus be encouraged to continue counting or make sure they stopped their clock at every event happening on the pitch.

In his autobiography, Alex Ferguson said “That night I watched the video of the second half and I used my stopwatch to time all the stoppages. There should, in fact, have been an additional 12 minutes.”

Has injury time favor one team only ?

Lastly we answer what everyone must be having in their heads about injury time and why only one team was favored.  Statistics show this is not true and here is why –

In which English Premier League season or match was an electronic board first introduced ?