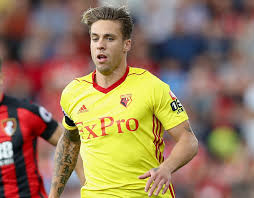 Ben Foster said “It started in early 2015. I was recovering from a serious knee injury and around the same time of my recovery there was Cure Leukaemia’s London to Paris bike ride. One thing led to another and I enrolled onto that. That was how the partnership started and I got to know all the people at the Charity really well, the founders, CEO and staff. I soon realised that not only it’s a great charity but the people involved are brilliant people to work with and I have had my affiliation from ever since then. I was announced as a Patron last year and I am proud to be one as well. Cure Leukaemia has a few social media accounts. The main charity account is @Cureleukaemia, then they have an account for the London 2 Paris ride: @L2Prevolution and Geoff’s Tour de France challenge has its own as well: @GT_15_ . Cure Leukaemia also do a great 6-a-side football tournament at St George’s Park as well with ex-players involved. The twitter account for that event is @CopaDelCL and the website is www.copadelcl.co.uk. The charity’s website is www.cureleukaemia.co.uk and I would suggest supporting Geoff Thomas and his team if you’d like to make a donation – you can do that here: https://www.justgiving.com/campaign/gt15”

A frustrated Nigel Pearson reflected on Watford’s inability to capitalize on their chances following their 3-0 defeat at Manchester United.

Nigel Pearson said: “[It was] a frustrating day in the sense when you play the bigger clubs it’s very important when you create chances or you have opportunities you do everything you can to take them. We didn’t take the chances that we had earlier in the game. Our attempts to press them high up caused a few problems in terms of frustration for them at times, although you know that when you play against teams like United they will have some good technicians and have spells of possession where you’ve got to show your discipline as well, [but] we’re a bit annoyed with ourselves to come in 1-0 down because we had some good chances and showed decent discipline in terms of our shape. From an attacking situation we’ve been countered and concede a penalty.”

Having picked up 13 points from Pearson’s first six games in change, Watford’s attempts to get away from the drop zone have stalled with only two points from their last five matches.

Nigel Pearson remains “focused and realistic” for chances of his club Watford’s avoiding . Pearson had given the Hornets a fighting chance of survival since his appointment in December, with a 2-0 home win over United an obvious highlight of his short tenure so far.

Nigel Pearson said “The Premier League is such a huge brand and it’s easy to get sidetracked. I’ve got to try and remain focused and realistic. Every situation I’ve been in as a player, as a manager and as a head coach, the circumstances are different. It’s difficult to compare one against another. The Leicester season, in 14/15, was an incredible turnaround, but that side had been built over a number of years and there was an identity which was very real within the club. One of the big factors is recognising that things are different. I’m not a believer in that what has worked somewhere else will do somewhere else. If you work like that you’ve got no chance. Adapting to what is required and understanding what is going on at another club and trying to keep focused is what’s really important – and concentrating on getting our preparation right for every game.”

Pearson masterminded a survival act at Leicester in 2015, but knows he needs to find new methods this time around.

Watford have been boosted by return of Kiko Femenia. The full-back had been out of action since New Year’s Day after injuring his hamstring during Watford’s win over Wolves.

The Spaniard’s return is a boost for Nigel Pearson, who has used the 29-year-old regularly since he was appointed in December. Femenia has operated at left-back for Pearson and his performances prompted Watford to cool their search for defensive reinforcements in January.

#PremierLeagueStories @ManUtd – Is #BrunoFernandes like #PaulScholes and #JuanSebastianVeron + #EdWoodward backs @OleGunnarSolskjaer ( and other Manchester United stories )
#PremierLeagueStories @WestHam – Will #PabloFornals replace #TomasSoucek + Will #DavidMoyes convert #FelipeAnderson to #MarkoArnautovic ( and other West Ham stories )
We use cookies on our website to give you the most relevant experience by remembering your preferences and repeat visits. By clicking “Accept”, you consent to the use of ALL the cookies.
Do not sell my personal information.
Cookie settingsACCEPT
Privacy & Cookies Policy